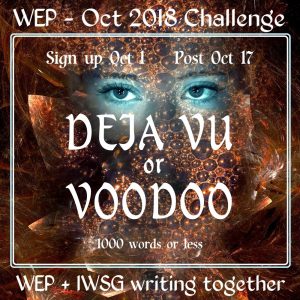 Deja Vu or Voodoo? is the prompt for this month’s WEP/IWSG flash fiction competition. It does seem to be a competition, not just an exercise in sharing our writing.  Well, WEP does stand for Write…Edit…Publish, so I suppose it makes sense.  It’s nice to be involved in a flash fiction meme with plenty of activity in it, anyway.

I confess I finally got the idea for today’s Deja Vu story after I’d written this month’s Fi50 (fiction in fifty words) which comes out next week.  If you write, and want to try your hand at the fifty-word version, nip over to the Ninja Librarian and pick up the prompts for the rest of the year. It’s fun, challenge, and quite quick!

This month’s story is just under 900 words.

My pulse was racing, my mouth was dry. I screamed with the delicious agony of it all. I was…

… in my bed, the alarm sounding softly.

I wiped my arm across my face. The sleeve came away soaked. Again. Third time this week.

But it felt so real.

It took several minutes to compose myself to face the day. I had, after all, ended up in some dark bedchamber in an old house, struggling with the curtains surrounding the four-poster bed, trying to stab the evil monster within before she woke and cast a spell on me.

I vaguely remembered a fairground, and an adventure with some girl, but I had no idea how it had developed into the bedroom in the castle. Or old house. It was stone-built and turreted, so it could be a castle. Did that matter?

I swung myself out of bed and got ready to face the day.

“You’re looking tired,” one of the other women said to me as we both took a pause at the checkout.

“Lack of sleep,” I replied, and smiled at the next customer placing their shopping on the belt. Why didn’t they use the self-checkout?

“I remember when I used to do your job,” she said, smiling back at me.

“Easier when it was busy, really, the time passes more quickly.”  A conversationalist. I prefer the silent ones.

Maybe she had done my job, once upon a time. Not for long, I bet. I nodded and smiled like the automaton I was becoming, and waited while she tapped in her pin. Maybe she’ll graduate to contactless soon.

“So, are you having those dreams again?” my neighbour asked.

“Yeah. Much the same. I’m tossing and turning, though. Given up on the screaming.”

“I don’t like to ask, but, are you on any tablets that might have started it? I got really bad dreams when I had something to help my teeth. That was before I got the gumshield I wear at night.”

I shot her a puzzled look. If she’d told me this before I hadn’t heard her.

“Grinding my teeth,” she explained.

“Have you ever dreamed of finding a dead body?” I asked in the next pause.

I called in on my mum on the way home. It was Thursday, and that’s what I did Thursday. If I didn’t, there would be calls, tears, sobs, ‘you don’t love me’s and all the rest. It was easier to just drop in.

Then I had to make an excuse not to stay to dinner.

“I’m starting an evening class next week. I’ll drop in, but I’ll have to leave in time to get there.” That would be good for at least one term, if not the whole year. Better check the dates if I wanted to keep that up.

“But Thursday’s our evening!” she complained.

“It’s the second level course. Only on Thursday. Did the first one a couple of years ago, on Mondays. I have to fit it around the work shifts as well, Mum, don’t forget.”

“They treat you so badly there. You should get a better job. Or a man to keep you in splendour, like I did.”

“Yeah, right. I don’t think they exist any more Mum.” You killed the last one off, you old hag. My dad was a saint to put up with you.

I made a note on my phone that I had a course Thursday nights, just to make sure I kept my lies straight.

I contemplated the bed before I got into it. Was there something about my bed that gave me these dreams? It bore no resemblance to a four-poster. Mum’s didn’t either.

I sighed, got in, and put out the light.

It was a séance. No, it was a witch doctor. I had a doll and we were sticking pins in it.

I woke to the sound of an ambulance siren screaming by. 5.30 am. Too late to go back to sleep, too early to get up. How long had these dreams been going on? A month? More?

Maybe I should take something to help me sleep, then I wouldn’t get them. I’ll check with pharmacy when I get in.

I went downstairs, kicking something that looked remarkably like a doll under the table in the hall as I turned the stair.

Coffee over, I had a long, unhurried shower, before sticking on my uniform and heading out of the door, only five minutes earlier than normal. Where did the time go?

That night I took the herbal remedy the pharmacist suggested. I can recommend it highly.

I didn’t have any dreams at all. In fact I only came round when I had finished tidying the bedclothes and taken the knife out of my mother’s body.

I think I can plead temporary insanity and blame the pharmacist.

Make sure you go round to read the other excellent entries, listed here: