Hello, is this planet Earth? is Tim Peake’s curated collection of photographs from his six months on the International Space Station (ISS) in 2015-16.  You probably followed it with me, or with more official sources, especially if you’re British!

I confess I got bogged down in my planned non-fiction read, A Little History of Gardening, and switched to this book to complete my non-fiction challenge into this year.  Will I finish Jenny Uglow’s book before the end of the year? Maybe. I do know that having ‘read’ Tim Peake’s book in one evening, I’ll be returning to it again and again.

Hello, is this planet Earth? 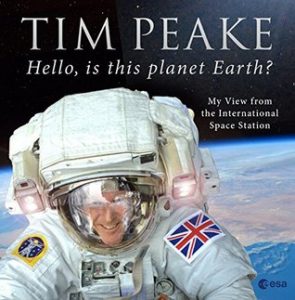 ‘It’s impossible to look down on Earth from space and not be mesmerised by the fragile beauty of our planet. During my mission I became determined to share this unique perspective of the one place we all call ‘home’. This book captures a journey of discovery, not just the discovery of planet Earth – a stunning oasis of life in the vastness of space – but also the discovery of a newfound passion for photography, which has had a major impact on me. I hope readers enjoy leafing through these pages as much as I enjoyed taking these pictures.’ …[more goodreads]

There is a lot more to the blurb, which probably has more words than Tim Peake uses in his book.  It’s worth reading for the facts (one of which helped me get the right answer in a quiz yesterday) about his trip, although these are also summarised in the foreword.  The beautiful book, a manageable sized hardback with pictures filling each page, could be described as a coffee-table book, but really, it’s much more.

Tim gives some tips about the photography, and the particular issues concerned with: photography on a small structure moving fast enough to orbit the earth several times an hour, photography in zero gravity with dust floating about, and photographing rarely seen places when you’re in the middle of a timed scientific experiment (that being why he was there in the first place!).

What he does even better is to pick out photos of spectacular views and group them into sensible clusters.  The daytime earth.  The night-time earth.  The deserts. The oceans.  Making sense of what you know from maps when the region unfolds below you in true colour.  Oh, and the sunrises and sunsets.  The aurora over the north pole when you’re passing over England.

For all that we whizz about our local areas, in a crowded and frantic existence, we really live in a small area of the vastness of our world.  Most populated places are on the coast.  Beware rising sea levels!  Tim does not go as far as campaigning for us to look after this fragile planet better, but rather presents us with views and invites us to ponder.

If you’ve done the zooniverse photo identification project, you’ll spot some features in the desert section that I’ve seen in Mars pictures, as well!

It is simply beautiful. One to dip into over and over for some peace, and a sense of perspective, with some good music in the background (I played my Himalayan music CDs). I recommend it to anyone who would like to think more about the planet we live on. It’s an inspiration.