Ribbons and Candles – this month’s theme for the WEP/IWSG flash fiction. Every other month we get a prompt from Denise at Write…Edit…Publish, and then at the beginning of the publishing month we link up at her blog. This month Denise has asked us to post early for Christmas, so mine is now out on the 12th.

Check out the linky list, and get your own out straight away! 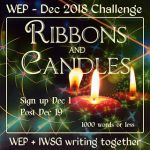 It’s a lovely theme, well-suited for the holiday season – although I’m not sure they play such a part in the southern hemisphere celebrations.  I remember Christmas Pudding ice-cream under the canopy in the garden for my only foray down under for Christmas!

This story may not be quite as upbeat as you might expect for Christmas flash fiction, but it reminds me of lots of people – although the outcome is fictitious.  I notice that many of my Christmas stories (such as this one) have a slightly warped element to them.  Maybe it’s because I’m ambivalent about the whole season of goodwill and excess to all men.

The story is just under 1000 words, and you’re welcome to comment in a friendly way, but you don’t need to review it!

Silent words to my daughter

My grandmother grew up with candles, all around the house. The way she told it, it reminded her of her youth. They didn’t have gas in the cottage where she grew up.

By the time I reached secondary school I got around to asking her: why didn’t you just turn on the light?

“In those days,” she said, “there was gas lighting in the towns. Electricity came later. So everyone who had gas didn’t want to pay for electricity. Then the gas men came round and explained that they wouldn’t be doing gas lighting any more. That was after the war. I was still small then. But my mother, your great-grandmother, she never trusted the gas after one time when her friend’s wall lamp exploded. So we didn’t have the gas lights. We stayed with candles.”

So it was from grandmother that I learned the wise use of candles. Always have a solid, stable base for them. Don’t put them near paper hangings, or under shelves, or near curtains. Make sure you pinch the wick when you’ve put them out, to stop the afterglow.

My brother was an expert at putting candles out. He would pinch the wick through the flame to extinguish them. “It doesn’t burn you,” he said. “You just have to be quick, and go in right at the bottom. It’s the yellow flame that burns, not the blue at the base.”

Of course I learnt at school that’s not really true, but it just feels that way when you do it quick. Do not put a finger in a blue bunsen burner flame, for example. It’s super-hot. My friend Jerry did that, and had to see the school nurse, who bandaged his finger up. He couldn’t use that hand for weeks. Our teachers made sure he did his work, though, so that other kids didn’t get the idea they could slope off if they did something equally stupid.

Did your schooling include carrying candles around the corridors for ceremonies, learning not to get the dripping wax on your fingers? Yes, it hurt, but only for a moment. We learnt in so many ways. You didn’t have the chance. Health and Safety stopped all that.

Candles were all the rage when I was at college. We weren’t supposed to have them in the halls of residence, but everyone did. The fashion was to stick one in the neck of a pretty bottle, mostly the Portuguese rosé wine, which had a lovely squat base, or a champagne bottle if you’d had one, just to show off. Then you’d get another candle and make drips running down the side. I think it was because swish Italian restaurants had them on their tables, and of course we couldn’t afford swish Italian restaurants, but most of us could put together a fairly decent spaghetti bolognese. That reminds me of Timothy… but you don’t want to hear about him.

The next rage was for those American candles, all thick and colourful. When you lit them, they’d burn down leaving the tower of wax on the outside, and the flame glowing inside. I had one for ages, that my friend Angela gave me one Christmas. I gave her one the same year. That was how it went with Angie and me: we’d get a bright idea for something the other might like, and we’d end up buying the same things in secret for each other. We still send each other Christmas cards. I wonder how it would have been if I’d married John instead of her? You shouldn’t have the same tastes in everything as your best friend.

I didn’t go back to using candles though. Except at Christmas, when I would put real candles in the table decoration. So much prettier than anything else with the lights down low, sparkling best tableware, and a bronze turkey sizzling on its platter waiting to be carved.

That was when I used to make the decorations from natural objects like fir cones, and sprigs of holly. Collecting those was fun.  I’d tie a ribbon round the base, too, and sometimes press leaves into the sides of slightly warmed wax to make it stick.

I should have taught you how to make those. Taught you properly, not just left it to your memory of times past.

I’m sorry I couldn’t come to stay this Christmas. Maybe I’d have realised, if I had. Maybe I’d have noticed all the ribbons round the candles, and done something about it. You’d have told me I was making a fuss about nothing. I often do, apparently. But I feel I should speak up when I see something I think is wrong. It’s just that these days, so many things I think I know aren’t relevant in the modern world. Times have changed. I don’t know why you thought candles have changed. Pretty metal stands. Embossed with tracery and petals. Just a variation on a theme, you know. Ribbons have changed quite a bit. Sometimes they aren’t even made of cotton, or satin. Maybe fabric ones have flame-retardants applied, for Health and Safety, of course. The paper ribbons obviously hadn’t. I did say last year. You probably didn’t listen. You probably didn’t listen to me saying you shouldn’t put candles under the Christmas tree, or among the Christmas cards on the mantleshelf.

All I know is what the coroner said; the fire probably started with the home-made decorations catching in the candle flames.

I’m sorry I couldn’t be there to warn you.

Christmas will never be the same.

Ribbons will never be the same.

Candles are banned from my home, forever.