A Pinch of Magic is new release, which I received from the publisher via Net-Galley.  The blurb looked interesting, although I disliked all the gushing quotes from other authors included on Goodreads – which I have left out here.  For good reason, as it turns out.

I’m very grateful for the advance review copy – the book is published next Thursday, 7th February.

A Pinch of Magic 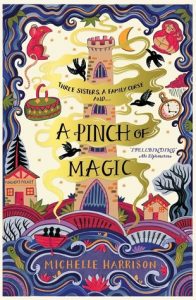 Three magical objects with the power to change their fate.

Will they be enough to break the curse?

Or will they lead the sisters even deeper into danger? …

It’s not the best sign: I sat down to write a review and I couldn’t remember how the story started. Betty is the middle daughter of three, with dad in prison and mum dead. Their overworked and dispirited granny (when she’s not been imbibing her spirits) looks after them in her dilapidated bar.  Betty’s disgruntlement gets worse as her older sister, who used to be such fun, is now a sour sixteen year-old.  As Betty reaches her birthday, she discovers the reason why.  The curse is upon her and her sisters.

Among several things in a Pinch of Magic that give me cause to twitch, the so-called ‘blood moon’, seen in broad daylight, is a full moon turned red by the shadow of the earth.  The terrain confused the heck out of me, since they were in marshland with mists and fogs making everything impossible to navigate, yet with deep channels and rocky coves (and caves) creating a big swell and breakers when a high tide rushing in.  But then it is magical-realism, and the terrain doesn’t have to be real.

The adult characters were reminiscent of old seadogs, although they were mainly old warders and old lags.  Everyone seemed to have a criminal past, but then the whole adventure hinged on releasing a prisoner who promised them the secret of breaking the curse.

well told, but not gripping

You can probably tell I wasn’t gripped by this adventure. Yet it was well told, with occasional detours to tell the story behind the creation of the curse. Thinking about it, my problem may be that I didn’t see much difference between Sorsha (the curser) and Betty (our heroine) voice-wise, so I mixed them up between reads. Realising that I was finding it all too easy to put down and forget about, I determined to read to the end in one go.

A Pinch of Magic is an easy read, with plenty of interest for a range of ages in the MG genre. How Betty’s adventure would pan out developed into plenty of suspense, although from a long way out (well, about 42% through) I had three-quarters of the solution.

The writing is delightful, and the story well told.  It’s very good middle grade fare, and I’m probably being over-critical.  Or a grouchy old granny like Betty’s. Actually, I’m just a bit disappointed it didn’t create as much magic as the blurb did.

Book Review | A Pinch of Magic by Michelle Harrison