Rebel of the Sands first caught my attention because of its gorgeous cover.  I think I added it to my list pretty quickly.  Then it was nominated in the Goodreads Book of the Year 2016, and I voted for it on several rounds – until it won!  So I really thought I ought to get around to reading it when I saw it on my library bus.  It was a great start to my reading year.

Rebel of the Sands 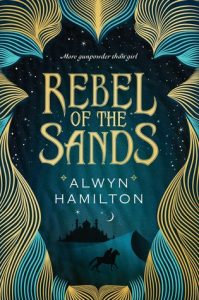 Mortals rule the desert nation of Miraji, but mythical beasts still roam the wild and remote areas, and rumor has it that somewhere, djinn still perform their magic.  For humans, it’s an unforgiving place, especially if you’re poor, orphaned, or female.

Amani Al’Hiza is all three.  She’s a gifted gunslinger with perfect aim, but she can’t shoot her way out of Dustwalk, the back-country town where she’s destined to wind up wed or dead.

Then she meets Jin, a rakish foreigner, in a shooting contest, and sees him as the perfect escape route. But though she’s spent years dreaming of leaving Dustwalk, she never imagined she’d gallop away on mythical horse—or that it would take a foreign fugitive to show her the heart of the desert she thought she knew.

Rebel of the Sands reveals what happens when a dream deferred explodes—in the fires of rebellion, of romantic passion, and the all-consuming inferno of a girl finally, at long last, embracing her power.[goodreads]

It starts with a girl pretending to be a boy in a sort of Arabian desert version of Skunk Corners. If you haven’t read the Skunk Corners books, you should.

I was hooked from the start.  There are mysterious strangers, and air of mystery about the girl, an air of deadbeat about her situation.  Amani’s got to get out – and she does in an amazing whirlwind of an episode.  Alwyn Hamilton can write – powerfully, descriptively and full of action sequences that keep you hooked.

The tension the author creates between the two main protags keeps you guessing, although sometimes it seems they will never… or do they?  The pair of them set off on a journey prompted by the rebel cause, and of course Amani is only doing it for her own ends, to free herself from the tyranny of her uncle.  But it’s a tyranny that will not change when she reaches her intended destination.  Her travels teach her that.

Politics riddle this adventure, and I wondered whether my own books in draft could stand comparison. The author writes so well it is almost unnerving.  But even Elly Griffiths can say that of other authors she’s read. Maybe I should just take a leaf from Alwyn’s Hamilton’s book, and get my act together in equally as exciting a way. Different twists, but just as compelling.

It’s probably YA rather than MG, but I’m sure all the kids are reading kissing and fighting these days. For adults who like a touch of magic and plenty of exotic scenery, it’s brilliant.