Another new book follows hard on the heels of Curved Space to Corsair.

This time, it’s back to the Princelings series with….

The Princelings of the East Books 4-6

I said I needed to read the earlier books again before I started writing books 9 and 10, and this was an ideal two-in-one opportunity. I thoroughly enjoyed the books, and loved particularly meeting Hugo and Humphrey again.  The book will be out on Wednesday 20th February – Victor’s birthday!

I mentioned them yesterday in my guest post for the Story Reading Ape. The main theme of that was the similarities between gardening and writing! 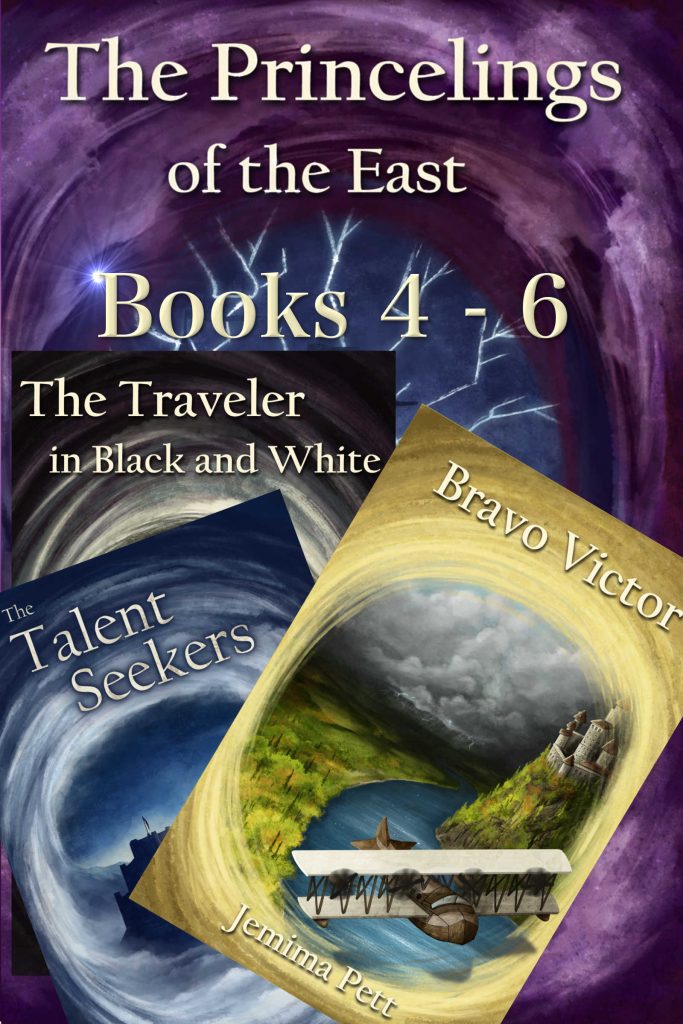 The Princelings of the East Books 4-6; box set 2

A time tunnel from the future, a castle with paranormal powers, an assignment in foreign parts. Three separate adventures take us further into the world of Princelings Fred and George. We meet Lord Mariusz finding both opportunity and trouble when he steps back in time; Humphrey, the refugee from the Lost City, seeking somewhere he can call home, and Victor, the ambitious young barkeeper, setting out on his business career, with two, or is it three, assignments to unravel industrial espionage.

These three books in the series take us from the discovery of the time tunnel through to the complications of travellers crossing their time lines, while all the while making progress towards an end product to deliver the promise the Princelings made in the very first book.

I decided to add some of the review excerpts into the long description – so nice to reread these!

“Hugo is a pretty awesome character. He’s quick-thinking and smooth-talking but unlike characters with similar traits, he’s not immune to failure. … He’s sort of an anti-hero but you just can’t help it; you’ll love him by the end of the book. He’s a true three dimensional character, something I didn’t expect from a novel about talking guinea pigs… I didn’t honestly expect it to be a Chandler-esque novel with complex characters, a mind-blowing plot and a fascinating society. But it was! Hugo is and will likely always remain one of my favourite non-human characters of all time.” (Carrie Slager, The Mad Reviewer)

“This book has plenty of elements to entertain the reader. From the main character Hugo (did I say he was charming?), to his efficient assistant Willow, to the shady characters he encounters. Throw in some castles, murder and vampires and I think you’ll agree it’s an exciting mix.” (S W Lothian, author of the Quest series)

“I love Humphrey! Sensitive, thoughtful, with a special talent for listening, as well as a photographic memory, the wonderful central character in this, the third book I have read in Jemima Pett’s original and inspiring series, stole my heart.” (Wendy Leighton-Porter, author of the award-winning Shadows From the Past series)

“When Victor sets out to modernise his Inn of the Seventh Happiness, his velocipede is stolen and he meets a nefarious character trying to import a banned drink. Then a friend goes missing and it’s up to Victor to find him. REDWALL meets WIND IN THE WILLOWS in this sixth instalment of the Princelings of the East series.” (M G KIng, author of Fizz and Pepper at the Bottom of the World)

'I didn’t honestly expect it to be a Chandler-esque novel with complex characters, a mind-blowing plot and a fascinating society. But it was!' #princelings #ebook #boxset Click To Tweet

Where to buy the box set:

I really must remember to read Redwall!

You’ve only got one more day to enter the Curved Space to Corsair Giveaway – ends midnight (evening) on Tuesday 12th.

… and for UK readers

All my Princelings of the East paperbacks are now available at Waterstones online! @Waterstones #paperback #kidlit #UK Click To Tweet
Yet another new book! Princelings Box Set 2

2 thoughts on “Yet another new book! Princelings Box Set 2”