The Age of Misadventure is the second novel by Judy Leigh. HarperCollins, the publishers, offered me an ARC  through Netgalley, since I’d reviewed A Grand Old Time during last year’s #AtoZChallenge and loved it. Read on to find out what I thought of the follow-up!

The Age of Misadventure 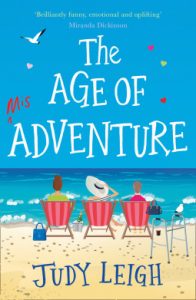 55-year-old Georgie Turner doesn’t need a new man. Her daughter, aunt and sister are the most important people in her life (and the most infuriating). But it seems the older they get, the further apart they drift.

Georgie’s never been a fan of her sister Bonnie’s husband, so when she learns her brother-in-law has been up to no good, Georgie sees an opportunity to bring the women of her family back together. Along with her 21-year-old daughter and 80-year-old aunt, she packs Bonnie into the back of her car and they leave Liverpool to hide out on the coast of Sussex. With the help of some sun, sea and bottle or two of prosecco, this will be an adventure they’ll never forget.

But could the right man find Georgie while she’s stopping the wrong man finding her sister? [goodreads – excerpt]

Having loved Judy Leigh’s first book, I felt it worth taking up the publisher’s offer and reading The Age of Misadventure. The blurb seems to offer a similar harum-scarum chase, and in some ways it’s true. But instead of escaping from the prison of an old people’s home, this one features a silly woman escaping from her shyster husband.

It’s a very family-orientated book. Georgie’s long-standing protective attitude towards her younger sister will doubtless resonate with many. The concerns of both women for their daughters and the relationships they are in, ditto. The care given to Nan, who is actually Auntie, trapped in her home with little heat and company. It’s all great stuff.

Actually I found the sister thing suffocating, and got extremely irritated with both of them, but I did wonder if that was just that I don’t have a sister. Maybe this is a sister thing? Maybe it’s me. Actually, sometimes Georgie reminded me of my sister-in-law, which as she’s really a very nice person, is not a bad thing. That ‘she’ is ambiguous on purpose!

The trouble with the book really stems from the stupidity of each of the characters. How does ‘escaping from your husband and not leaving a trail’ not go into the pea-brain of the sister, who uses her husband’s credit card all the way around the country? Well, that’s a clever plot point. The way Georgie then managed to escape from the flat for secret trysts without alerting the police who were on duty to watch for the stalker really irritated me—both for her irresponsibility and the implication that the police simply weren’t watching. Twice. Three times, and a fourth if you count Nan getting out as well. Is this forgivable in a crazy adventure where the protagonists continually make really bad choices? It makes me wonder whether my failing as a writer is that my characters act logically—for them, anyway—rather than extremely stupidly all the time.

I was tempted to dnf as I got so exasperated with them. But the characters are really well drawn, the adventures in various parts of the UK nicely done, the uncertainty over which of the contacts was really a stooge (why didn’t she just google the so-called journalist? Wouldn’t you?). The problems are worth seeing if and how they sort themselves out. And Nan has some wonderful malapropisms and failures of idiom (as does the Spanish boyfriend, who’s a hoot).

So, it’s worth reading. Funny. Exciting. Exasperating. Take your pick. But I might be a bit cautious before tackling Ms Leigh’s next novel.