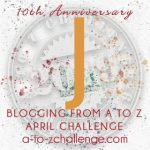 Jewel Box is the prompt for this month’s WEP-IWSG flash fiction challenge. It’s not due until April 17th, but I’m doing it nearly a week early to go with J for Jewel in the A to Z Challenge.  Apart from two book reviews, this and my fiction in fifty words #Fi50 offering are the only new posts during this year’s A to Z, the rest are all flashbacks in honour of the A to Z’s anniversary.

If you like to write (stories, poetry or anything else), or wish you had an incentive to write, WEP provides support and a platform for feedback. There are prompts already set for the year, so nip over and check out their instructions in order to join in.

My jewel box is a Carruthers story: you can find more of them here, here, and here (I counted seven in all!). He’s a classic artefact-hunter, sometimes Victorian, sometimes more 1920s, but definitely a rogue. The story is 998 words, and feel free to comment, but not a full review.

“Why not? She stole it from me in the first place.”

Carruthers glowered into his wine cup while Henry stared at him. The old resentment had welled up as he bowed at the woman on her golden throne, jewel box on a footstool beside her. He detested the sight of her, the triple chins barely contained by the solid gold torque, the white paste make-up covering what must be deep lines by now.

It hadn’t been so much as a flood as a trickle. He’d barely recognised her, then he’d seen through the mask with horror. Her treachery had hammered at the back of his brain until it had broken through, washing his mind of the present. He almost staggered as he relived the ancient tomb. An old wound in his shoulder throbbed. All because of this woman—this witch.

“I’m going to take it back.” he repeated. “Are you with me?” He lifted his head to his accomplice in many adventures, challenging him for another effort.

Carruthers shrugged. “She’s just a woman. It’s just a palace. It’s probably not as secure as some of the tombs.”

“Maybe not with secret traps, but live guards…”

“Guards for hire, not natives who give their lives for their gods. There’ll be someone willing to look the other way. This needs research, though. All to be done by tomorrow night.”

“We can hardly stay longer.”

Several hours later, Carruthers returned to their room, shrugged off his burnous, and pulled off his boots. He gazed at his sleeping companion, considering what he had learned while exploring the palace.

Strangely, none of the treasures displayed in the throne room had any overt protection. Why?

Would nobody dare steal from the queen? Her subjects would not, but few of her subjects would know what treasures were there, let alone know what to do with them. Pass them to people like Carruthers, possibly. Traders, passing through, overnighting at the city would be searched routinely. Every gate was guarded. Any trader worth his salt would make sure not all their goods were taxed, they would have hiding places. He and Henry travelled too light to have hiding places.

He parked an idea and thought on.

The objects on display might not be the real thing. Copies, to give a great display—especially of past gifts. The real thing would be in the palace vaults. More secure, but a vault was home territory to Carruthers; he’d been breaking into them all his life.

But that jewel box was an exceedingly good copy, if it was a copy. And the queen liked real treasures around her. Desired them. Gloated over them.

Was the protection very subtle? He had detected nothing that would provide protection. No secret beams of light, soft stone pavements, wispy threads to trap burglars. Unless there was some severely modern technology hidden away, this type of building simply couldn’t set these things once the room was empty. You could not turn a pressure panel on and off like a gas-lamp.

Carruthers lived by questioning the obvious. If this queen could turn security traps on and off at will, what sort of technology would that be, and how could he track it down and disable it?

He stood up, pulled his burnous on again, but left his boots where they lay.

Henry caught up with Carruthers at lunch next day.

“I say, old chap, where have you been all morning?”

“Just chatting with the traders. I found one going our way. Persuaded him to let us join them.”

“Oh, good. No risk of us getting lost on this bit.”

Carruthers slept well after lunch, in readiness for their overnight journey. He ensured his animals were properly loaded up, timing it to arrive at the gate just after the guards finished checking the caravan.

“Just the same as we came in. Yes, this box contains perishable food, those are the waterskins, those contain wine.”

A blare of trumpets split the air. Shouting came from the palace. The guards pointed their rifles at Carruthers and Henry. “Wait here!”

“We’ll wait, certainly.” Carruthers got back on his horse, and leant on the pommel.

“No idea, but you know we always do what we’re told in this sort of situation.”

The guards returned, waving Carruthers off his horse with their rifles.

“Yes, of course, no problem, you don’t need to prod me. What is it? This box, yes food, look.” Carruthers opened a brown box, and showed the guards the fruits and dates inside. He shut it up again and showed him the other containers, and unpacked his nightroll to show it was also empty. Another guard went through Henry’s things in the same way.

When they were done, the guards escorted them through the gate, then hared up to the head of the caravan, already strung out on the road to Aqaba.

Henry looked up to the guards ahead. “What are they looking for?”

“No idea. Must be something missing from the palace, I suppose.”

Sounds of arguing drifted back.

“Looks like they’ve found something,” Carruthers observed. The guards had hauled a man from a camel, and were dragging him, together with a sack containing something heavy, back towards the city.

“Doesn’t do to steal from Queen Athopshetra,” he commented.

“I wonder what he stole?” Henry watched as the reprobate was hauled unceremoniously through the gate.

“I have no idea.” Carruthers smiled, resisting the urge to look at his fruit box, exactly the same dimensions as the queen’s jewel box, carefully covered in a tight-fitting layer of oiled paper, inside and out, and dropped in the dirt a couple of times for further camouflage.

He gazed ahead, as the caravan set off again. He’d keep his secret safe until they were well away from all these adventurers.

Please visit other WEP-IWSG entrants to see what they made of the prompt, and other A to Z Challengers for other ideas on J.