Week 4 of 30 Days Wild sees me completing the Gardenwatch missions, and adding in more Random Acts of Wildness. There are only four days left in June, as I’m writing this for Thursday. There’ll be a final round-up on Monday, with, hopefully, some pictures of the special event I’m doing on Saturday.

Back to the week just gone.

After an exhausting day on Thursday (see last week) I missed the start to the Longest Day, only waking up at 8.30! Unheard of for me.  It was a lovely day, warm, with plenty of sun and cloud in equal measure. Good for being in the garden, pulling out spent flowers and exposing those in flower, planting out more vegetables from seedtrays, and, between 21:30 and 22:00, doing a bat survey.

I wasn’t expecting much, so I was relatively pleased with six pipistrelles (two common and four soprano) and two whiskered bats. The whiskered decided to investigate me further as I stood in front of my house with my bat detector,. They flew along the front of our houses, turned at the trees on the other side and returned a couple of times.  The pipistrelle were mainly flying over the millstream upstream of the mill itself, and flying over my garden in pursuit of insects too.  The common pips were around the front of the house, over the gardens and up the side of my house over my wildflower patch.

This sounds good, but it is less than a quarter of what I might expect this time of year. I think over-zealous river management is to blame, but changes to the properties might also have disturbed their roosts.  I’ll check back next month and see if there are more around then. 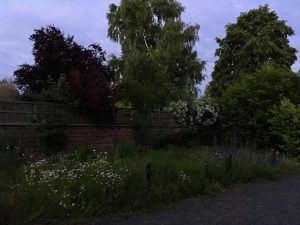 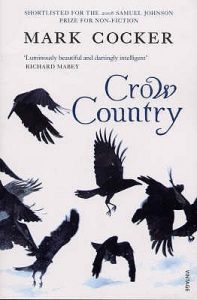 More of the same, weatherwise. I had started reading Mark Cocker’s Crow Country yesterday.  Today I marked several passages worth further thought, and got several more ideas for a new book project I’m working on in the background.

His discussion on ornithologists (bird-watchers) as counters of birds rather than observers of birds struck me as very interesting.  The general public see every birdwatcher as a ‘twitcher’ which is really only applicable to those who seek out rarities and dash off wherever they might be found, especially to add them to their lists. Mark’s premise seems to be that we all, unconsciously or not, are simply listers, because when we go for a walk, we don’t stop at the first flock of bluetits or bed of nettles and spend our allotted time studying them.  We move on, in search of other sights and sounds.

He’s right, of course, but it’s still a sweeping statement.  There are those of us who study patches (as he does himself with his rook studies), but recording the trends in birds present or absent, tying it in with food sources in some cases, is closer to the sort of ornithology of the old ‘natural scientists’ from whom Natural History developed.

To prove Mark right in some ways, and me in others, I was delighted to see a juvenile Great Spotted Woodpecker on my seed feeder this morning.

Yes, I recorded it.  But I also watched it for the ten minutes it was there (it couldn’t have been there much longer, since I’d been in the garden just before I came upstairs). Firstly, to spot its red head, which indicates juvenile plumage, but then to laugh as it clearly had not yet got the knack of feeding from the tube. Mine has ring-perches, which make it easier for forward feeders (like woodpeckers and robins) to perch and grab some food through the hole. This woodpecker pecked forward straight, supporting itself with its tail just fine.  Then it decided to go for a seed at an angle through the hole, at which point its tail slipped sideways off the round tube, leaving it dangling.  It didn’t seem strong enough to do what the adults do, which is to dangle from the lower rings without tail support.

It certainly managed a good feed, though. I apologise for not taking a photo of it.

I fitted in my last activity for Gardenwatch, the Worm Detective.

Golf at Caister, on the coast, with my friend Jean. We became friends when we discovered a shared love of birds, whilst working out what the strange ones on her course were one very wet April.  They were whimbrel.

Despite Natural England requiring the golf club to cut a lot of their gorse down to allow a rare grass to grow more, the birds that liked the gorse are still around. Most of the course is a SSSI, a fact which Jean discovered and uses to lobby the management to ensure the course is looked after in an environmentally sustainable manner.

The birds were delightful.  The flocks of Painted Lady butterflies were magnificent. The less said about the golf, the better.

More golf, this time at my regular course. I was very aware of the birdsong at the course in the Midlands I visited last week, so I noted the chiffchaff, dunnock, wren and blackbird singing on my home course. Not as much as there used to be, but unfortunately there was very loud building work going on in the neighbouring site.  Maybe the birds are as aware of the changes afoot as the rest of us members.

Checked out my wildflower patch to see a huge patch had been flattened, possibly by cats jumping into it. But there are now three Bee Orchids, and a new blue spiky flower which I need to identify. The other tall stand of blue flowers near the front of the patch are Viper’s Bugloss, but this isn’t the same, and it isn’t plain Bugloss. It might be Spiked Speedwell, but I think the leaves are too strap-like.

The St John’s Wort is coming into flower, and some of the Ragwort, except for those hosting a lovely mass of cinnabar moth caterpillars! The Lady’s Bedstraw has establihsed itself in good numbers, having only started to gorow last year.  I hope it will attract lots of caterpillars for nice moths.

It looks like the Meadowsweet has gone. I’m thinking of digging up a couple of tracts of soil in the autumn to see if it brings the poppies up again.  They are at their best on soil which has been disturbed.

Some lovely very dark butterflies were around the wildflowers, probably Ringlets, since they are noted for flying in cloudy weather.

I’m torn between going for a walk, either one of my old regular patches, or to the pingo ponds which I’ve explained in the past, or getting a major piece of garden maintenance done. The weather is cool and overcast, and we’re just waiting for the superheatwave to hit us from the continent. I should do both before that heat hits.

See what my decision is on Monday!