Pan’s Labyrinth came out on July 2nd.  Wait a minute, I hear you say, surely that’s been out for ages? Well, not the book, apparently.

Guillermo del Toro directed the film and Cornelia Funke has helped him get it into book form, according to Bloomsbury (the publisher) and NetGalley. I’d like to thank them for the ARC. 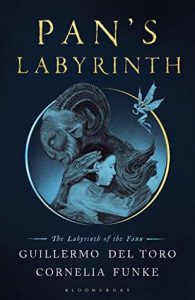 Ofelia has been sent to stay with her new stepfather, a ruthless captain of the Spanish army. For him, the dark and eerie forest in which they live is a cage, serving only to hide resistance fighters in the drawn-out and bloody civil war – those he has made it his aim to destroy.

But with her mother bedridden, Ofelia is left unchecked and becomes enchanted by their magical home. Obsessed with fairytales, she is drawn deeper and deeper into a mythical world which is both cruel and kind, benign and deadly. For Ofelia, too, must endure violence if she is to complete the tasks that will win her place at the centre of the labyrinth: the palace of the Faun… [goodreads]

I heard a great deal about the film, and started to watch it on tv once, but only lasted ten minutes, if that.  Too scary.

The book is also scary, but in a different way.  I felt I knew what was going on, most of the time, even when I didn’t like it.  I was scared for the characters, not what was going to happen on screen next.

This book is wonderful. It has del Toro’s magic and Funke’s amazing turn of phrase. There have been times when I found Funke’s heritage from the Brothers Grimm too nasty to consider suitable for children. I don’t think Pan’s Labyrinth is intended as a children’s book. It is too violent, with the violence of war, when terrible things happen: men become monsters just as monsters become… less monstrous.

the magic of the book

The captain that Ofelia’s mother has married is a monster of his own making, although the way this book is told suggests it might be as much fate as self-determination.  The magic of the book is the way the narrative of Ofelia’s adventure in civil-war-torn Galicia is interspersed with legends, or fairy stories, of witches and magic events.  They start as something unrelated, and steadily turn into suggestions of past wickedness where curses have formed the people in the narrative itself. It’s as twisted as the labyrinth the Faun, or is it his Fairy, persuade Ofelia to enter.

Despite it tearing at my feelings and making me feel sick at some of the violence inflicted on innocent people, I couldn’t put it down. I may not like it, but it’s sensational, and I might even read it again.  Brilliant.

PAN'S LABYRINTH: del Toro's magic and Funke's amazing turns of phrase tore at my feelings. I may not like it, but it's sensational - BRILLIANT #panslabyrinth #netgalley #Bloomsbury Click To Tweet
Book Review | Pan’s Labyrinth