Excuses today for the silence from me most of this month, except for the moon landing post.  Did you notice?  I haven’t been out much either this month, failing to visit just about everyone.  Book reviews are generally prepared soon after I read them, which is just as well, as only Saturday just gone has been written since June.

Something happened to all my websites.  It wasn’t hugely serious, but it stopped them working. None of them would load at all for about a week. I’m not sure whether one of the plug-in upgrades (probably Jetpack, which is WordPress’s additional things it gives to .com users but not .org users) left a gap through which hackers could get, but there was certainly stuff there that shouldn’t be there.  The tech support at Bargainhost got it running pretty quickly, but I needed to do quite a lot of basement clearing out to actually use the backroom(dashboard).  I still haven’t finished for the sites I don’t use that much, and to be honest, I think I could do a better job on this one.

But it’s working, and I can post again. Although I’m still having the problem of it blocking me out after I’ve been logged in a while. I have no idea why this happens.

I’ve been having trouble with wifi and websites loading incredibly slowly.  The trouble is, there are so many parts to the problem.  It all started when the line distributor in my village was moved because of some new housing. Then they did the same to the distribution box on the other side of the river.  I don’t think that should have affect me, but it didn’t help. BT having been touting their fibre-optic service, so I finally bit the bullet last week, when they sent me two emails and three marketing blurbs telling me it was free to upgrade, but I need need to spend £10 on a new hub.

Well, I’d been thinking my four-year old hub might need an upgrade anyway.

In the usual way of these things, the hub arrived two days earlier than they specified.  Did that mean they would ‘switch me over’ two days earlier too?  It certainly seemed like they had, since I did a speed test on my system, and frankly the results were very good with the old hub.  With the new hub ten minutes later, the results were slightly better – 20% for download, 10% for upload. But having forgotten to check when the fibre was supposed to be activated, I checked again yesterday and they couldn’t get a reading for either!  I tried another speed check and the results were ambiguous. They might actually be too fast for the speed test!

But all this takes time, of course.

The feedback from my beta readers on book 9 of the Princelings series, Chronicles of Marsh, left me with a big rewrite to consider. I spent the first half of the month thinking about it, while spending a lot of time also organising a golf competition. Well, worrying about organising the golf competition, because actually, they’re much, much less complicated than organising orienteering competitions, so I kept thinking I’d missed something.

Having worked out how to do the changes to the book, I sat down and wrote most of the new material in four days. Then I had to marry up various parts of old and new, and work out whether things referenced later were still included in the early part, and so on.  I’m still musing on whether some more bits need to be cut, because it’s on the long side. So I’ve either been writing or thinking about writing most of the month. And I do get wrapped up in my world when I writing.  My golfing partners are sick of it, but very tolerant. 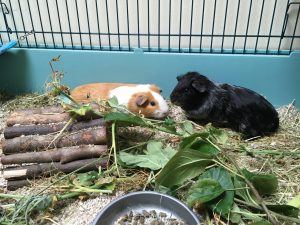 Last week our heatwave hit us. I’m not good in heat, but my house stays comfortably cool naturally, so I’m lucky.  It still takes some effort and monitoring to make sure the guinea pigs are in a reasonable temperature.  That meant I didn’t want to use the computer during the day when the room temperature was already pushing towards 28 (outside it was 34). Translation to US: 82 and 93. I know you probably have it hotter, but we had new records set for East Anglia (38.1 in Cambridge), and that’s what matters, in terms of ‘is it hot?’  And note the chart legend isn’t designed to go above 30!

It was far worse in mainland Europe with temperatures in the 40s were common. The UK record is 38.5.

By the third day I couldn’t even use the computer at midnight because it was still 28 in the boys’ room.  It wasn’t getting lower than 23 outside at night, even at dawn. So I didn’t get online at all.

But I did take a nice air-conditioned trip to the guinea pig rescue, where Sophie is in dire need of foster homes and permanent homes for an influx of baby guinea pigs.  I brought three home – here are codenames Fire and Eclipse. I daren’t name them properly 😉 Fire is maybe 10 weeks old, and Eclipse is maybe 8 weeks.  The third, Ice, is very skinny and shy – probably only 6 weeks.

So all in all, I have missed the month online.  You can see how far ahead I get with my reviews, though! The only one I had to nip in and do was Crow Country, which I did on Friday night.  The next two weeks are already done, so I must get other ones done while I remember the books!

I apologise to IWSG followers, but I’m planning a double post next month!

And when I get Chronicles out to my beta readers again, I can finally put some effort into those short story submissions I wanted to do – deadlines are late August and September.

Silence hides a plethora of excuses

6 thoughts on “Silence hides a plethora of excuses”