Cosmic Colin: Hairy Hamster Horror and The Witches both came from my library. MG means middle grade, a period of schooling in the US that translates into the roughly 8-12 age group in the UK.  I regularly peruse the childrens and teens book sections on my mobile library bus, looking for gems that the predominantly US members of the Great Middle Grade Reads Group have never heard of.  I think UK kids books are very different from US ones, and these two are the sort of book I can’t see ever being selected for a book of the month on that group. It’s a shame, because the US members are missing out, in my humble opinion!

The illustration of both of these are magnificent.  Collins obviously reveres the Dahl approach of the more illustrations the better.  These are particularly good books for boys, especially reluctant readers. Unlike Captain Underpants they are tasteful, even if poo features liberally. 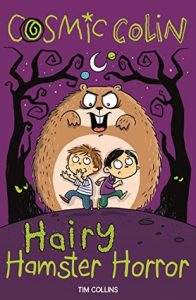 When the spacebin lands on a strange planet where hamsters have developed into the dominant life form, Harry and Colin are in for another adventure.

Unfortunately, the boys are captured by the humongous hamster hosts during a sightseeing trip to the Great Wheel of the Andromeda Galaxy. Harry and Colin are imprisoned as the school pets, bundled into a human-sized cage and forced to run on a giant wheel.

Things go from bad to worse when the school’s laziest hamster is charged with looking after Harry and Colin for the holidays. Will the adventurers find a way to escape from their hamster hell?

Throughly enjoyable story for 7-10 year olds (and upwards), full of hairy beings, snot, burps and poo. Puts a different slant on the aliens, when you are the tiny pets, and hamsters are the huge intelligent society!

Beautifully illustrated with a cartoon-like approach interspersed with maps, speech balloons and prose. Guaranteed to keep a reluctant reader going.

This is the third in the Cosmic Colin series, and if this is a typical sample, I’d recommend the lot! 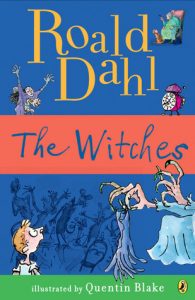 This is not a fairy-tale. This is about real witches. Real witches don’t ride around on broomsticks. They don’t even wear black cloaks and hats. They are vile, cunning, detestable creatures who disguise themselves as nice, ordinary ladies. So how can you tell when you’re face to face with one? Well, if you don’t know yet you’d better find out quickly-because there’s nothing a witch loathes quite as much as children and she’ll wield all kinds of terrifying powers to get rid of them.

A book firmly in the story-telling mould.  Sometimes it feels a tiny bit patronising, but gets away with it.  The idea that witches can be told by their wigs, gloves and pointed shoes is hilarious and works well in the story!

It’s an excellent story and I think I liked it more than some of the other Dahl books – for example Fantastic Mr Fox. Or maybe I’m just getting onto the right wavelength for them!