Two anthologies for you today, to help me catch up on my reviews. I like reading anthologies when I’m busy, because of the easy put-down, pick-up nature of the book.  The downside is I find it almost impossible to remember the stories in them.  For Castles In Spain I started making a note as I went through, just for the review.  That lasted two stories… But I recommend them both to you.

I also thank the editors for having surnames that helped with my Alphabet Soup Reading Challenge. I had plenty of choice for W but only found more V authors when I was well into Mr Villareal’s book.

The first, Oceans: The Anthology (Frontiers of Speculative Fiction #2), I have marked as ‘owned’ but can’t remember getting it or why.  The first was familiar and it may be that the story was picked up from another anthology I’ve read. In fact, it might have been an email from Third Flatiron congratulating their authors who had been selected for these Frontiers specials.

The second Castles in Spain: 25 years of Spanish Fantasy and Science Fiction, was in a Storybundle of international scifi. I think it was specifically ‘written originally in a language other than English’. 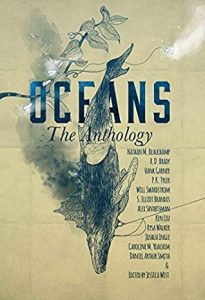 “It is an interesting biological fact that all of us have in our veins the exact same percentage of salt in our blood that exists in the ocean, and therefore, we have salt in our blood, in our sweat, in our tears.
We are tied to the ocean. And when we go back to the sea–whether it is to sail or to watch it–we are going back from whence we came.”
– John F. Kennedy

Underwater cities, lost civilizations, crops, climate change, and dead zones.
In this collection of ocean-themed stories, twelve of today’s top speculative fiction writers explore our morality, our built-in societal restraints, and reflect upon our state of grace.
The waves roll in, the waves roll out.

I’m glad the blurb listed all the authors and many of the stories – it does help as a memory jogger as well as a taster for you if you’ve heard of them.  I haven’t, of course. Well, a few of them.

The standard of these was superb.  They were the sort of stories that make a would-be anthology author weep for the sheer brilliance of the ideas. ‘Why didn’t I think of that?’ is my constant thought, when others ask ‘How does anyone think of that?’ But still…

My favourites here (i.e. the ones I remember without prompting): the hole in the middle of the desert, containing the remnants of the last ocean, which was a centre of pilgrimage; the mermaid who just needed to get back to the sea; the clone who was born in the air and transferred when she was old enough, working with clones born below the sea, with a completely different lifestyle and mythology; the stranded explorer on a dead world, where life was a beach…  There were many more, but I’d have to go back to the book to look, and then I’d list them all.

It’s a brilliant collection, and a perfect beach read for nerds like me. And a great read for everyone else 😉

Castles in Spain: 25 years of Spanish Fantasy and Science Fiction 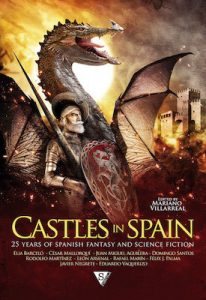 An exceptional chance to get the stories by Spain’s top authors that changed the direction of its speculative fiction.

My brother is big into Spanish (and specifically Galician) literature, so I jumped at the chance to read some in translation.  Unlike some reviewers, I was not disappointed.  Yes, the quality varies, as it would if you took 25 years fiction from any country. Ideas of what is new, different and classed fantasy, change. SF not so much.

I loved the stories set in Spanish cities most, perhaps because they were redolent of visits to dark enclosed spaces that open onto magical gardens.  The most memorable is one where a girl, new to the city, is befriended in the square, but her mother doesn’t see who she’s waving to.  I think we realise early that this is not quite right, but the twist on the story is excellent, and poignant.

The best, in my opinion, was the first one, The Star, by Elia Barcelo. This was a magnificent piece of science fiction bordering on space opera, combining flashbacks and dreams, with an other-timescale entity.  I’ve often thought of other physical scales being an issue for aliens: it was a very long time ago I used to relate the tale of the alien who landed in a puddle and drowned. But species living at a different rate, not just lifescale… This is magnificent, with thoroughly believable science.  And then I remember my alien landing short story, but somehow this story is massively different, and needs to be read not talked about.

So I recommend it, especially if you like stories from other cultures. The less European you are the more picky you might be with them, but I found them most enjoyable.