Ashes of London went on my To Read list almost as soon as it came out, but it lingered there until I had the opportunity to get a copy through Net-galley last year. Thank you to them and the publishers for the opportunity.

As there was no urgent review date, it hung around until the end of August, which was strange, since I read it around the dates of the four days the Great Fire of London raged from Pudding Lane through the City of London, which was more or less all of London then. It’s been a part of history that has always intrigued me. It is one of the few bits of British History I did at school that I enjoyed, probably because of the emphasis on the people. If you visit London, take a trip to the Museum of London, located in part of the Barbican. Their exhibit and video of events, day by day, is absolutely wonderful.

Ashes of London (Marwood and Lovett #1) 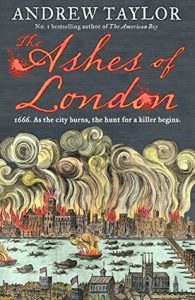 A CITY IN FLAMES
London, 1666. As the Great Fire consumes everything in its path, the body of a man is found in the ruins of St Paul’s Cathedral – stabbed in the neck, thumbs tied behind his back.

A WOMAN ON THE RUN
The son of a traitor, James Marwood is forced to hunt the killer through the city’s devastated streets. There he encounters a determined young woman, who will stop at nothing to secure her freedom.

A KILLER SEEKING REVENGE
When a second murder victim is discovered in the Fleet Ditch, Marwood is drawn into the political and religious intrigue of Westminster – and across the path of a killer with nothing to lose … [goodreads]

It starts in the middle of the most awesome piece of English history, the Great Fire of London. Marwood is trying to reach someone he is due to meet at St Paul’s, and the fire is driving him back. Miss Lovett is desperate to make an assignment with her father inside the cathedral itself. He struggles to pull her back, and she bites him on his hand for his presumption. The author’s description is marvellous.  Not just the fire itself, but the effects, the lead and silver (from the roof and ornaments) running in molten rivers through the cobbled streets, the rats fleeing along with the people…

I wrote a short story once about the rats fleeing the fire, but I never thought of the St Pauls’ rats caught in the molten metal – quite horrible.

Marwood’s search for Miss Lovett leads him into several scrapes. Her situation in life is so uncertain, that she finds danger where she should be secure, and safety in the most dangerous of places. The chapters switch between the two protagonists, and showing both tangled in danger, intrigue and revenge. Eventually their worlds collide again…

Ashes of London is a pacy and convoluted story, but I never got lost in it. Sometimes I had to rack my brains to remember the general layout of London before the Fire, but that’s only for the purists. Taylor’s London should pass all historical tests with flying colours. A working knowledge of the lead-up to the English Civil War will help you engage fully with the conspiracy elements, but I’m sure they come across well anyway.

An exciting, realistic and atmospheric story.  Actually, it’s awesome. Five stars from me, and on to the next in the series!

2 thoughts on “Book Review | Ashes of London by Andrew Taylor”