The December question from the Insecure Writer’s Support Group relates to hopes and the reality.  It suggests that insecure writers still in the ‘aspiring’ phase write about where they see themselves in a few years time.  For those who have been writing and published for some time: maybe thoughts on what it feels like.

The short answer is about the insecure aspect.  To put it in the classic learning circle, when I started I didn’t know enough to be insecure, not really.  I didn’t think I was much good, and I was probably right, but I was enthusiastic and kept going. Now I’m insecure because I know what I’m doing, most of the time.

Before explaining that, I need to thank all the IWSG team, and especially our co-hosts: Tonja Drecker, Beverly Stowe McClure, Nicki Elson, Fundy Blue, and Tyrean Martinson!  And I generally forget to give due acknowledgement to our founder, the absolutely wonderful, marvellous, and what would we do without him, Alex J Cavanaugh.

December is an eight year anniversary

Two weeks ago I was thinking about the eight years since my guinea pig Fred departed from this world. His brother George had gone exactly six months earlier, and I think it was grief that took Fred in the end. But, as I’ve said somewhere, he knew about the books I’d written starring the pair of them, and knew I was getting ready to take publishing into my own hands.

So Fred’s eight year anniversary is also the anniversary of my first foray in the self-publishing world.  First on Kindle, because that’s what I’d heard of. About two weeks later in December, they were out on Smashwords and heading to iTunes, B&N and Kobo, because by then I’d found out about them. I was full of confidence, because I knew they were niche—I didn’t need all those agent rejections to tell me so!

It’s the start of that classic circle—I didn’t know that I knew nothing.  Unconsciously incompetent, they call it.

The next stage on that learning curve is conscious incompetence, where you realise that you know nothing and work hard to change that situation.  In many ways in the current writing world we never really grow out of that for long, because things change so fast in publishing.  In writing, maybe not so much.

For writing I would say I’m teetering between conscious competence and that previous stage.  I know what I’m doing, and I know what I want to do.  Most of the time I think I’m doing it, but I’m also conscious that I can do better.

Does it make me lose the status of insecure writer?  No way! In fact, I suspect that writers who think they aren’t insecure in some way may be fooling themselves. Tastes change, fashions change, writing styles change, systems change…

Back to square one 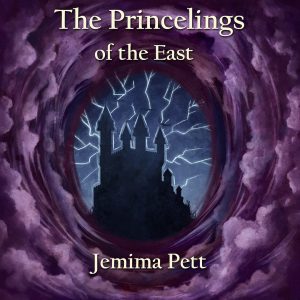 I may have just published the ninth in the Princelings series, but I’ve been back to square one on the learning curve with audiobooks, as I mentioned last time.

The update on the Princelings of the East audios, is that Christopher Preece is currently working on the first book, and I’ve already checked more than half the chapter files.

I was a little nervous of his narrative style on the audition tapes as he’s very formal and sounded a bit stern, but in the chapters I can hear the relaxation in his voice, and I think he’s clear and comfortable to listen to.  I must warn you, though, we are British, and so if you are used to reading my stories in a US accent, it may be a shock!  But I love the voices he’s got for Fred and George, which justified my immediate response to hearing him that he was ‘the one’. He also does Hugo just as I imagined him, although I can see Mariusz’s Mum wincing at the pronunciation of his name, which is as I would do it, not as she does it!

I gave Chris an updated version of the first Princelings book, editing various things like ‘said’ going behind the person’s name, not in front, and other quirks which I now find irritating.  When I’ve matched the tapes against the new edition I’ll upload it everywhere.  Anyone that already has it will be able to update their devices to the new version.  If you like Whispersynch on Kindle, that should work, too.  Whispersynch requires the voice to be pretty much identical to the written word, which is why I’m reading the text as I listen to the chapters.

I’ve learnt all this in the past month.

But I’m still an Insecure Writer!

Oh, and I’m also waiting to hear whether I’ve bought a new house on Friday. I think it’s all going through….

You still have a day or so to enter the Chronicles of Marsh Launch Giveaway, which closes on December 6th.  You can go to the launch page – or just enter here! And watch out for the Midwinter’s Eve giveaway which will be posted on December 15th.

16 thoughts on “#IWSG | The December Question”