Dragon’s Gate was picked by the Great Middle Grade Reads members as a book of the month some time ago.  I added it to my list, and bought a cheap second hand copy on Amazon. It took a while to get around to it, though.  The spur was that I needed an author beginning with Y to complete this year’s Alphabet Soup Reading Challenge. Hooray – and thank you, Mr Yep! 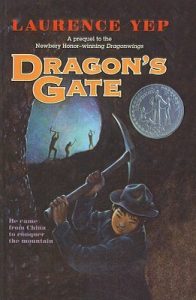 When he accidentally kills a Manchu, a fifteen-year-old Chinese boy is sent to America to build a tunnel for the transcontinental railroad through the Sierra Nevada mountains in 1867. Sequel to “Mountain light” [goodreads- paperback version]

Otter has always dreamed of going to America, “the Land of the Golden Mountain.” There, together with his adoptive father and his hero, Uncle Foxfire, he plans to learn everything he can about American technology. Armed with this knowledge, they can all return to China and carry out the Great Work – to free China from the tyranny of the Machu and other invaders. [hardcover version]

Although this is listed as being part of a series, it totally stands alone.

We start in the village in China where Otter has a privileged lifestyle. His family members working in the USA send back lots of money. making his mother and aunt rich.  One fritters it away in opium, the other does good works. The first part of the book introduces us the politics of China at the time of the Opium Wars. These were a typical British attempt to conquer some more of the world, this time by ensuring the opium trade continues (and making sure the addicts are the locals).  I was reading this in the run-up to our General Election, so pardon me for my cynicism, and belated realisation that some privileged overlords never change.

But this book is not about that. It is about the workers from China who made the journey to the new world of opportunity, to help unite the country by building a railroad alongside the Americans. They aim to learn the secrets of engineering and other modern ways, so that they might improve their own country.

Otter hankers after his uncle and father, and when he’s the victim of a setup, escapes ‘justice’ by heading for the railroad himself. At first, it continues the somewhat irritating self-important point of view of the young man, but as he starts to discover the realities of life, so the story improves, in my opinion.  Becomes more interesting, anyway.  A side issue of a ‘forbidden friendship’ with a Yankee boy who arrives with him, adds to the contrast between the locals and the migrant workers.

Up to this point, I felt the usual yawn I get when reading so many nominees or winners of the Newbery Prize.  It’s just that the stories seem so ‘worthy’.  I can almost hear the teachers discussing the historical and moral issues in the classroom. But then Yep’s magnificent descriptions start to take over. The mountain they are tunnelling through comes alive, and the snow threatening to avalanche their wooden huts into oblivion dances with both storm and sparkle.

From a book set aside to pick up again when I had time, this turned into a can’t-put-downer. It is definitely worth traipsing through the build-up to get to the exciting, almost visceral climax.  There’s a fairly boring wrap-up, but it may mean more to those whose history it celebrates.

All in all, Dragon’s Gate turned from a generous 3-star to a solid 4-star read for me. Thank you, Mr Yep, for some wonderful insights into bits of history I knew little about, excitingly told. Although I’m afraid the conditions they experienced didn’t surprise me one bit, cynic that I am.  Well worth reading.

One thought on “Book Review | Dragon’s Gate by Laurence Yep”