Erebus; a ship that had a notable adventure in Antarctica. I saw an advert for Michael Palin’s new book, added it to my TBR, and saw it in my library’s ‘new books’ section.

Reader, I borrowed it.

Erebus: the story of a ship 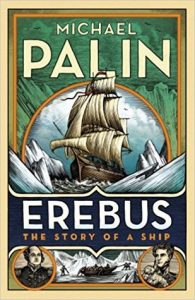 In his major new work, Michael Palin – former Monty Python stalwart and much-loved television globe-trotter – brings to life the world and voyages of HMS Erebus, from its construction in the naval dockyards of Pembroke, to the part it played in Ross’s Antarctic expedition of 1839–43, to its abandonment during Franklin’s ill-fated Arctic expedition, and to its final rediscovery on the seabed in Queen Maud Gulf in 2014.

He explores the intertwined careers of the men who shared its journeys: the organisational genius James Clark Ross, who mapped much of the Antarctic coastline and oversaw some of the earliest scientific experiments to be conducted there; and the troubled Sir John Franklin, who, at the age of 60 and after a chequered career, commanded the ship on its final journey. And he describes what life on board was like for the dozens of men who stepped ashore in Antarctica’s Victoria Land, and for the officers and crew who, one by one, froze and starved to death in the Arctic wastes as rescue missions desperately tried to track them down.

To help tell the story, he has travelled to various locations across the world – Tasmania, the Falklands, the Canadian Arctic – to search for local information, and to experience at first hand the terrain and the conditions that would have confronted the Erebus and her crew.

Illustrated with maps, paintings and engravings, this is a wonderfully evocative and epic account, written by a master explorer and storyteller.(goodreads)

This is indeed a wonderfully detailed and epic account of a ship, from its creation to its bitter end.  Actually I can’t vouch for the bitter end as I didn’t get that far.

I was hoping for a dashing and heroic adventure in the Antarctic. Probably, Erebus herself wanted one too. The long days of her abandonment as she entered service right at the end of the Napoleonic Wars would surely end. There was hope, wasn’t there?

Thinking back on the much-enjoyed Michael Palin travelogues on television, I should have expected the detail. I should probably have expected the side alleys down which we were led. We discovered things about Erebus’s second lieutenant’s grandfather’s maiden aunt and her flirtation with…. Well, I jest, but it was easy to get lost in the histories of all the people who had been involved, however peripherally, in her making.

By the time she was finally fitted out for a journey to the South, I was bored. After another six pages of shipboard life in the sort of detail anyone who has seen Master and Commander is fully aware, I no longer wanted to read on. I did, however, finally learn how the bells for telling time worked.

With so much more to read, I decided I didn’t need to know more of her adventures in the Antarctic. Probably the first bit of Antarctic exploration I’ve given up on.

If you fancy an epic, give it a go. It’s a bit like reading all O’Brian’s series in one go. But Palin’s travelogues are fun, if not exciting. Actually, this might be the one book I’d prefer on audio, read by the author. The font is tiny!

Book Review | Erebus: The Story of a Ship

6 thoughts on “Book Review | Erebus: The Story of a Ship”