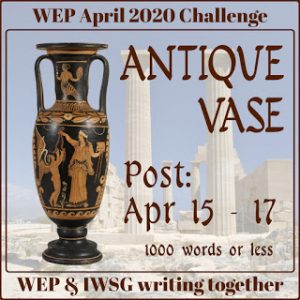 Antique Vase is the prompt for this month’s WEP+IWSG writing challenge.  I loved the badge.  It gave so many ideas, but particularly the quality of the washed out sky and temple, that really took me to Greece. Specifically to the Temple at Sounion, on a headland overlooking the azure Mediterranean. I was there on my first solo trip abroad. I have fond memories of it, and also reminders of things one must do and not do if one wants to stay safe! An antique vase did not feature among my souvenirs. I did buy a modern reproduction at Tipasa in Algeria some years later, though.

As it turns out, my final choice of topic has very little to do with Greece, the Mediterranean or solo travel.

Low tide in the harbour. The boats lay mainly to one side, propped by their keels, or on a double keel, comfortably upright. It was a lovely place for a June holiday, especially in good English weather.

At first, he thought it was a tin can, or maybe even a plastic float. He’d struggled to pull it clear of the mud. He thought it had just been the hold the sticky, squelchy mud had on it. Even after dunking the heavy pot in the nearest bit of water, it still smelled of old socks and dead fish.

But it had once been elegant.

He took it up to the cottage to show Elsie.

“What have you got there?”

“Dunno, thought it was rubbish, but it seems to be in one piece.”

It was a classical shape, like it was related to a Roman amphora. But it had a flat base, and curled loopy handles attached to a rolled rim. Barnacles, cement and old seaweed hid any elegant decoration.

Elsie took it in hand and turned it round, examining what could be seen of the surface underneath.

“You know, if you could clean it up without damaging what’s underneath, I reckon it would be quite pretty. Stylish, even. Better than all those shells and pebbles, at any rate.”

Tom agreed with her. He found a large bucket, filled it with water and carefully immersed the vase.

“I wonder why it was there,” he mused. He described the exact place he’d found it.

“Not a place you think it had been washed up?”

“No, too sheltered. More like someone had deliberately thrown it in, but it had been caught in the backwash of the tide.”

“And nothing else? No sign of Granny’s silver, or the prize chamber=pot?”

Tom laughed. “No, just the one, isolated, unwanted pot.”

“It’s more a vase, I think. We must check it for markings. Maybe we can trace it.”

Tom took it out of its waterbath every day, did a bit of scraping, and put it back again. He didn’t want to scrape the ceramic decoration off. It was weathered enough by the seawater. The barnacles resisted his attempts to evict them, but he knew they’d succumb.

After a week, they had to decide whether to bring it home with them.

“I don’t know. I just feel…maybe it belongs here.”

Whether Elsie’s hesitation brought on the accident or not, she slipped on the path on the way to the car, the first accident she’d had in years. “Tom, I don’t think I can get up.”

“Sure you can. I’ll just stow this in the back and then…” He put the bucket, carefully enclosed in a large plastic sack, into the car boot, and turned to help her.

Halfway to her feet, she screamed. Tom called an ambulance.

Later, he unpacked the car, and gratefully extended the rental on the cottage.

After her hip had been set, Elsie was sent ‘home’ to rest. The chaise longue in the sheltered verandah became her day bed. At night Tom wheeled it into the kitchen. Eventually she started to move about a bit.

“Time for home, then?” he asked, as she managed to spend a whole hour sitting comfortably in an armchair.

“Much as I loved this cottage when we got here, I’ll be glad to see the back of it.”

The car broke down as it went down the hill away from the cottage. Tom managed to steer it into the local garage, with the help of the local mechanics pushing.

“What do you think?” he asked as the mechanic emerged from under it.

“Camshaft gone. Needs a refit. If you can leave it here for three days, we’ll get a new one and sort it out for you.”

“Old Mikey can rent you a car, good rates.”

Old Mikey’s car was a very nice SUV in immaculate condition. It got them and all their possessions back home with no further problems. Elsie settled herself in the conservatory, debating between a stiff drink and several Ibuprofen. The Ibuprofen won. Tom unpacked, placing the bucket with his treasure in one corner.

“I think’s probably ready to be dried out now. Slowly. Maybe with a damp sack over it for a week.” He tended to its every need.

“I wish we’d never seen that thing.” Elsie glared at it.

That night she awoke to the sound of dripping. It seemed to be raining. When Tom came downstairs he found the kitchen flooded with water dripping from the ceiling. He called their insurance company, who assured him their homecare service would be with him within half an hour.

That evening, they sat in the conservatory with a nice meal delivered by the Imperial Palace. “Want some wine?”

The wine was corked.

“How can wine in a screw-topped bottle be corked?”

“Maybe it was before it got bottled.”

The next one was too.

“You know, since we got that vase,” he pondered later, “everything seems to have gone wrong.”

“I didn’t want to say that, in case you divorced me or something, but yes.”

“Do you think that’s why it was thrown away?”

“Do you think it’s cursed or something?”

“I didn’t want to say that aloud in its presence,” Tom whispered. He grabbed a pen and paper and wrote something down.

Elsie read it and nodded.

Next day Tom got into Old Mikey’s SUV and started to drive it back. After three near misses on the way from the M25 to the M3, he pulled off at Fleet services and hauled the vase out, still wrapped in its damp sack.

So if you find an antique Roman-style vase in the woods at Fleet services. Leave it alone.

Looking forward to reading more of your inspirations based on the Antique Vase prompt! Link up here…