My first week of 30DaysWild didn’t quite go to plan.  When you normally look out for wild things, especially the first year in a new house, it’s hard to do anything different from that you do daily.

Well, that fell apart.  I’ve never been much good at posting on the same day as I write something.  I much prefer to do my posts no later than the night before, and usually a week or more. There’s a book review post written for August, but that’s partly because the launch date slipped.

I was pleased I did the Bug Survey, though.

You saw on Thursday that the pictures weren’t working properly, and it was a bit late for me to sort out why.  I need to go and get some new ones, basically, especially for the Random Wildness posts.

It was cold and wet. Nothing much was around, and I spent the day editing Princelings Revolution in response to my beta readers’ comments.  So apart from thinking about doing something, I drew a blank.

I did some gardening, and weeding, so I don’t think I can really call this a wild day either. Apart from talking to the robin and adding more stuff to the compost heap. And watching the ospreys at Loch Arkaig, who are doing well with all three chicks being fed very regularly (touch wood).

Turned out much better than the earlier forecasts, and it was really a very pleasant day. I checked what the worm survey involved, and was very glad I’d posted the procedure on my post last year.

This was part of last year’s GardenWatch missions, and involved taking the turf off a 30cm square and seeing what was in the soil beneath. I picked the centre of my proposed veggie patch, roughly in between the three guinea pigs who were mowing it for me a couple of weeks back. 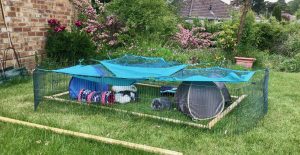 A smaller haul of worms was to be expected, since this grass was only laid in early March.  To find any was quite pleasing, although the female blackbird has had success in finding them in lusher parts. The soil is relatively sandy, considering we’re on clay, and very stony, so it might be mostly imported soil that I turned up.

The chafer grub is typical of grassland, and to be expected in imported turf. I suspected there were some present after some damage to the grass near the very top of the bank, consistent with either crow family or hedgehogs trying to root them out (they come closer to the surface at night). The vine weevil is a common garden pest, not so much a problem on plants in the ground, but a complete menace to pot plants. The hydrangea (in a pot) has some vine weevil leaf damage, so I may have to consider a nematode treatment.

The beetle was cute, and definitely a ground dwelling one, about a centimetre long. The ant may have found its way into the pile of soil, since I have a lot of them further up the garden, and have already learnt not to put any food plate or glass on the grass, because they’ll come running!

In all, not as many worms, but more species than last year’s established garden in Norfolk.

I’m hoping to do the survey next year in the same spot, although it should by then be a vegetable bed.

No big plans, since I’m staying on lockdown. Maybe do some research on places to visit after?