The Seed Savers series by Sandra Smith has been one of my joys to read over the last few years. I didn’t really understand Sandy’s use of the Bible as a teaching method in book 1, but now I realise that it was essential, as the only free speech allowed in this totalitarian world.  Through Treasure, Lily, Heirloom and Keeper, I’ve followed Sandy’s progress, and welcomed the commercial success she’s had in getting a traditional publisher.

Now the series has come to an end, Sandy’s blog is as encouraging and inspiring to new seed savers as her characters. Sandy is one of the MG BookElves, by the way.  I find it a little strange that we both started our series at the same time, and ended them with revolution!

I finished this book at the end of May, and nearly kept this review for 4th July, but I’d deliberately read it for #30 Days Wild, and that won in the end. 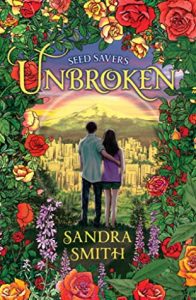 by Sandra Smith (S.Smith on Goodreads)

IMAGINE A FUTURE WHERE GROWING FOOD IS A CRIME

Although kidnapped by GRIM in an effort to strike back at her father–escaped former leader of the Seed Savers Movement–Lily quickly escapes with the help of sometime friend Rose. The girls camp out in Forest Park while plans are made for a safe rendezvous.

Meanwhile, Jason and Monroe join up with the questionable group Radicle, using their Monitor skills to hack into suppressed information in an effort to topple an overreaching government. Tension rises amid massive protests as Independence Day approaches.

Will lost freedoms such as food rights and an open media be reclaimed? Don’t miss the explosive final installment of Seed Savers! [goodreads]

Like most series of any length, the final book is not a stand-alone read. In this case, Keeper was pretty much a cliff-hanger, and so Unbroken picks up where it left off. You cannot come to this book cold, although I picked up who was who and what had happened almost immediately. I read Keeper five years ago, so it’s a miracle! As you know, in several books I’ve read, I can’t do that from chapter to chapter. This indicates that the author has rounded her characters and given them traits which resound in your brain.

Seed Savers is set in a world where our governments have made growing food illegal. Most people have forgotten that food even comes from plants, and cooking is unknown. But it emerges that this scenario is only for the general populace: the elite have a totally different lifestyle.  With some characters hacking government computers, others spreading the information between interested parties, the scene is set for an explosive outcome.

This is an entirely valid future scenario, and it shows in the detail. Our story hackers unearth government memos and papers dating back to the 1980s – ancient history in the arc of the story – and scientific papers from the early 2000s that are factually based. The development from there and the sociological changes are logical and horrifying. Or would be, had not the pace of government iniquity raced ahead and put us in scenarios now that we once thought impossible. I told Sandy at the start I thought she’d set it a little late. Without our vigilance, this could well be a world we are living in within twenty years.

'Seed Savers is not only a great MG series, but essential reading for all citizens of the world.' #SeedSavers by @authorssmith #foodscience but is it fiction? #5stars #30DaysWild Click To Tweet

Seed Savers is not only a great MG series, but essential reading for all citizens of the world. Unbroken brings us to a satisfying end, with plenty of pace, confusion, and danger. Congratulations, Sandra Smith, for an excellent and timely exposition of what could get even worse if we are not vigilant. And all wrapped up in an enjoyable children’s book. She’s a master of allegory.

And the denouement takes place on July 4th. Hence my posting date dilemma!