A hedge is a woodland in miniature. Hedges are probably one of the most underrated habitats in our gardens. I haven’t had more than three feet of one in any of my houses until now.  I was reminded of this when my first garden waste collection was picked up this morning. The bin arrived yesterday and I filled it immediately, with bags and bins of non-home-compostable waste from the last three months. Only two more bags to go!

I know that for some people, they need to cut their hedges and grass and don’t have anywhere to compost.  Personally, I think if you have room for grass, you have room for a compost bin, but that’s a discussion for another day.

The Garden Waste Service, run by the Council’s waste department, is common throughout England, and I suspect most of the UK. In both Norfolk and Hampshire you pay c£35 a year for the privilege of being supplied with a large wheelie bin and a kerbside collection, twice a month in summer, and presumably once a month in winter. I’ve never used it before, since I could make do with composting most of my waste, and taking a bag or three to the local recycling centre (aka tip) once in a while.  Only things that were too prickly or too big needed to go to the tip. Although I didn’t have too many ‘pernicious’ weeds in Norfolk, so any that I did have got thrown in too.

Now I have pernicious weeds (horsetail, which will survive in a compost heap and reroot where you spread the compost), and hedges.

Compost soft cuttings of hedges, and I included the soft new growth on holly, as a test.  You can compost any soft new growth except rhododendron, ivy, and laurel. I think their leaves will take too long to break down, and at least one of these produces cyanide in the process, although that isn’t a problem in the open air. That can all go in the garden waste collection, though.

I also composted a bit of rose and bramble, which will break down fine, but once it gets hard, it goes in the waste bin. It may leave thorns in your compost when you spread it out, too.

If you compost your grass clippings, turn them in with the top layer on your heap so they don’t become one solid mass.  Get a pile of grass clippings big enough, and they’ll rot down so quickly, and generate so much heat, they can spontaneously ignite! 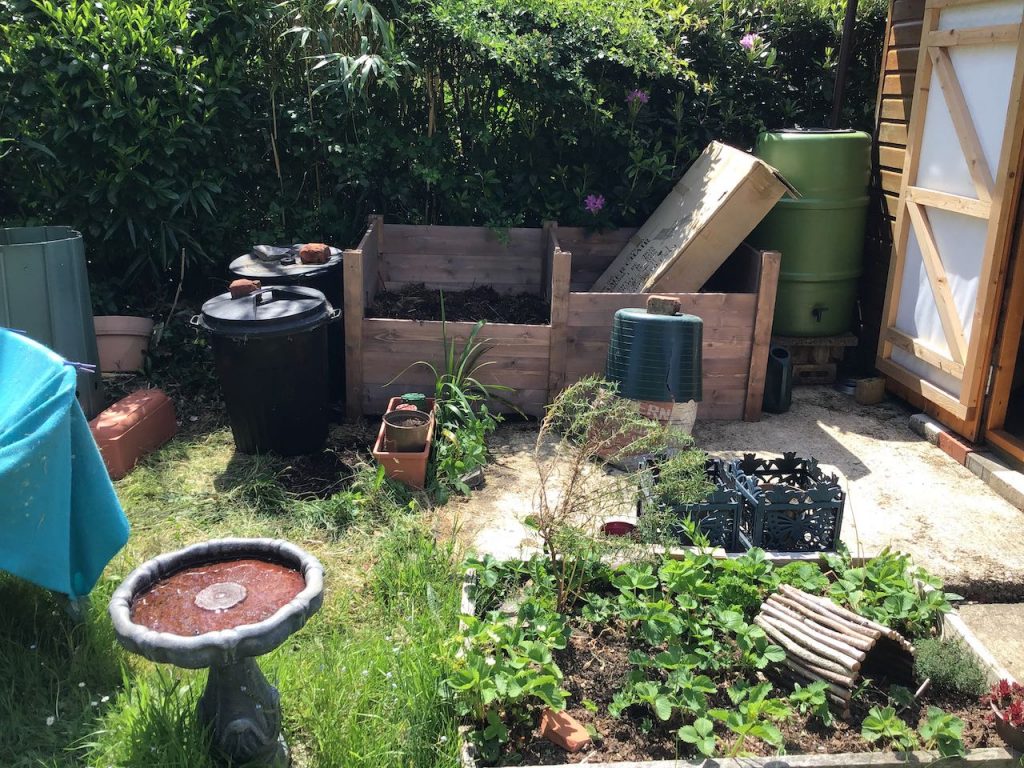 …Woody branches. The waste bin collection will take branches up to a surprisingly large size – an arm’s thickness at least. But not stumps. If you have a lot of thick wood, and don’t have a woodburner, why not make a wood pile in the corner of your patch?  The insects and invertebrates will love it, and that’ll be a source of food for birds and animals, too!

Don’t trim your hedge when…

…There are birds nesting in them. This time of year is still nesting period in the northern hemisphere. Unless you are sure your hedge is not occupied, don’t trim. Even if you are sure, trim by hand to help the beneficial insects survive.

…They are flowering and/or setting seed/berries.  I discovered this when I started to trim the large bush in the front, which is sprouting hair all over the place. I started trimming it (the blackbird had nested and flown in April) and realised I was cutting just down as far as its very minor flowers.  Then I remembered all the birds stripping the berries off it when I first came in December.  So I have left it as it is. I’ll have to cut it when the berries have been eaten. I may trim it back to the berries, very carefully, when I can see them developing. Same goes for the hawthorn.

The rhododendron in the hedge behind the summerhouse has finished flowering, so I’m cutting that back by hand. But if you are proud of your rhodie flowers, make sure you trim to a bud, or a leaf node.

Please dispose of your waste in a wildlife friendly way. Respect their habitats! #30DaysWild

Waste of a Good Hedge #30DaysWild

4 thoughts on “Waste of a Good Hedge #30DaysWild”