Anyone is an intriguing look at the progress of a new technological breakthrough several years into the future. I was fascinated by the NetGalley description and am very grateful to be provided with an advance review copy. 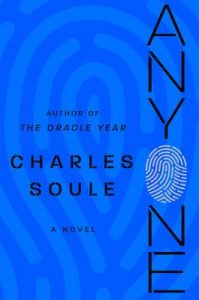 Charles Soule brings his signature knowledge—and wariness–of technology to his sophomore novel set in a realistic future about a brilliant female scientist who creates a technology that allows for the transfer of human consciousness between bodies, and the transformations this process wreaks upon the world.

Inside a barn in Ann Arbor, Michigan, a scientist searching for an Alzheimer’s cure throws a switch—and finds herself mysteriously transported into her husband’s body. What begins as a botched experiment will change her life—and the world—forever…

Over two decades later, all across the planet, “flash” technology allows individuals the ability to transfer their consciousness into other bodies for specified periods, paid, registered and legal. Society has been utterly transformed by the process, from travel to warfare to entertainment; “Be anyone with Anyone” the tagline of the company offering this ultimate out-of-body experience. But beyond the reach of the law and government regulators is a sordid black market called the darkshare, where desperate “vessels” anonymously rent out their bodies, no questions asked for any purpose – sex, drugs, crime… or worse.

Anyone masterfully interweaves the present-day story of the discovery and development of the flash with the gritty tale of one woman’s crusade to put an end to the darkness it has brought to the world twenty-five years after its creation. Like Blade Runner crossed with Get Out, Charles Soule’s thought-provoking work of speculative fiction takes us to a world where identity, morality, and technology collide. [goodreads]

Charles Soule chooses to tell his story in two parts. A woman researcher in the present, so it seems, is interspersed with a young woman twenty-five years into the future, who is clearly in some sort of disturbed frame of mind.

The younger woman is intriguing. Each episode feels like we’re mapping how she got to where she is now. Yet she is moving through a disconcertingly violent lifestyle in order to achieve some aim. It reminded me strongly of Sondheim’s Merrily We Roll Along where the scenes work backwards, so you discover how things changed.

The older woman is clearly brilliant, and you quickly realise her role in the invention of the technology. For a long time she seems pretty much an innocuous character, and the reader is sometimes left wondering why we have to go back to her. Indeed, several times I felt reluctant to do so. There is no pull to her story… well, not until I’d more or less worked out the key to the plot. It’s another one of those books where I struggle to get through the first half, only to read the last third in one sitting.

Soule’s writing is imaginative and heavy with science (which you can skip if you like). It’s brilliant world-building for the societal changes brought about by the NeoNet technology/company. Irritatingly, I insisted on reading it as Neo-net, even though everyone has changed it as a brand to N-e-One (Anyone). It’s dark, gritty, and diverse. So diverse you will have difficulty believing it can happen. I’m not sure whether the technology is at all practical or has any basis in real neuroscience, but accidents do happen.

I think it’s brilliant, and I sort of enjoyed it. I might have to read it again to decide. And that’s something you don’t often hear me say. Worth adding to your list, especially if you like gritty urban futures.

ANYONE by Charles Soule 'dark, gritty, and diverse. So diverse you will have difficulty believing it can happen. I think it's brilliant, and I sort of enjoyed it.' #anyone @netgalley #urban #specfic Click To Tweet
Book Review | Anyone by Charles Soule