The Long Way Home was the Goodreads Space Opera Group’s Book of the Month for August. I haven’t read many of the Group’s choices; they’d mentioned it before, so it was already on my list. That made it suitable for two of my Reading Challenges. I am very grateful for that, as I’m falling behind this year. I bought the Long Way Home on Amazon, and I’m really glad I did. Just over half-way through I put the next two in the series onto my TBR! 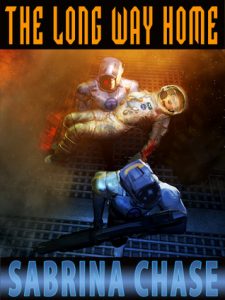 Webspace pilot Moire Cameron is one of the best–but even she can’t fly her way out of a catastrophic drive failure that triggers a time-dilation bubble. Left suddenly eighty years out of date, she is on the run in a world she no longer knows, caught in the middle of a human-alien war while agents of Toren hunt her for the information only she has–the location of the pristine world of Sequoyah.

The Long Way Home is the first book in the Sequoyah trilogy.[goodreads]

The Long Way Home starts in a space battle: a women with a different name from the blurb is fighting her enemy and doing her best not to show skills inappropriate to her status. Her thoughts and dreams reveal part of the puzzle.  The rest we have to uncover as the book progresses, along with those who are pursuing her for slightly benign and entirely unbenign purposes.

It’s a chase that takes us through the multiple layers of space society, and through more pseudonyms and ships.  The planets that Moire haunts are brilliantly devised, and the entire world-building impeccable. I particularly liked the planet Bone, with its leaning towards a Swedish-Indian heritage, in a place as cold as the tundra, and a wonderful indigenous creature that can eat anything, but preferably copper, called a nerya.

The author writes a decent pace, giving us a little time to breathe between emergencies, of which there are many—and varied ones, at that. For the first 30% or so it appears to be non-stop action, apart from flashbacks.

As befits a series, there are mysteries left to be solved, and an anticipation for what will happen next, that I’m really keen to get on with.  I managed not to lose track of who’s who in this book. I’m hoping I’ll read the next in the series before I lose them completely!  Highly recommended!