Today is the Cover Reveal for the final book in the Princelings of the East series: Princelings Revolution.

I’m also kicking off the Launch & Anniversary Giveaway, which will run until midnight on October 23rd, to cover my tenth blogoversary on 21st October! There may be additional options for entries added between now and then, so check whenever you see it.

About the Princelings series covers

When I decided to publish the first three books, I needed a cover illustrator. Looking at the lists of people offering their services, I gulped. Then my niece mentioned her daughter was in her final year of art school, doing Design and Illustration. Danielle English said ‘yes’ when I asked her to do the first three. It was something to get her name on something other than her college portfolio.

Little did we know it would lead to a run of ten books, and the start of her freelance illustrator career. See her Facebook page or Twitter feed for a better idea of what she’s doing now – or buy cards, gifts and prints at her Etsy shop!

These are not the first covers; we gave them all an update when I started bringing out the paperbacks with Blurb.com – a far better option at the time than Createspace (now part of Amazon).

The process usually starts with ‘pick a colour scheme’ and some ideas of what is important in the book; these days that’s a chapter summary. I may send Dani a sketch or chapter illustration if castles are involved, which they usually are.  In this final book I highlighted a few things in the text about Castle Marsh, and once we’d pretty much agreed the cover, I had to put her amendments into a chapter illustration! The tables are turned at last. 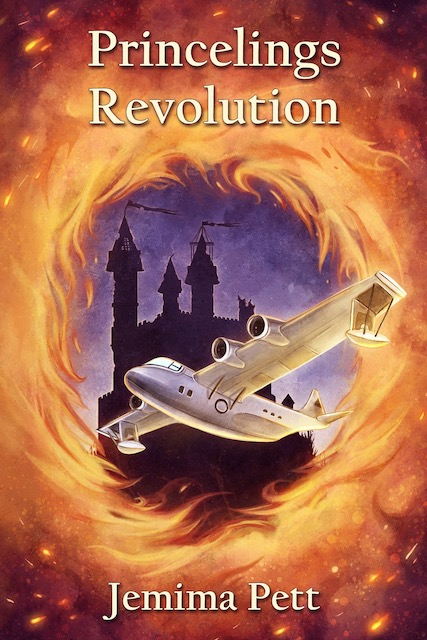 Book 10 of the Princelings of the East series – Princelings Revolution – the final book in the series, is on schedule for publication 1st October 2020.

The planes are crashing, George appears to be blowing things up, the people are angry at the changes and shortages. King Fred puts democracy to the test and finds it’s not all it’s cracked up to be.  There’s an organised anti-monarchy group called the Causists, and they are spreading false information which the people seem to believe. Things are bad—but they are going to get worse…

Will Fred even keep his head, let alone the promise made to Lord Mariusz at the start of the whole adventure?

The ebook is now available for pre-order a very special price at iTunes, B&N, and Kobo. This special launch price is only for a few weeks. It’s also on pre-order at Amazon! (who might price-match, but I have no control of that).

PRINCELINGS REVOLUTION The Cover Reveal! 'King Fred puts democracy to the test and finds it’s not all it’s cracked up to be.' published 1st October 2020. #princelings #booklaunch #giveaway Click To Tweet

This giveaway is only valid in countries and states where such games are legal. Entries close 11.59 pm on 23rd October 2020.

Entry options may increase during the giveaway period – check back or when you see it on another post (including launch and guest posts on other blogs).