Elly Griffiths published the Postscript Murders on October 1st! Is this too much competition for Princelings Revolution, or just a sign of a good date choice?

Thank you to Net-Galley and Quercus Books for the chance to review an advance copy. It was great at keeping my mind off other things. 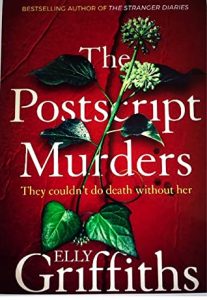 PS: thanks for the murders.

The death of a ninety-year-old woman with a heart condition should absolutely not be suspicious. DS Harbinder Kaur certainly sees nothing to concern her in carer Natalka’s account of Peggy Smith’s death.

But when Natalka reveals that Peggy lied about her heart condition and that she had been sure someone was following her…
And that Peggy Smith had been a ‘murder consultant’ who plotted deaths for authors, and knew more about murder than anyone has any right to…
And when clearing out Peggy’s flat ends in Natalka being held at gunpoint by a masked figure…

Well then DS Harbinder Kaur thinks that maybe there is no such thing as an unsuspicious death after all.

From the sleepy seaside town of Shoreham, to the granite streets of Aberdeen and the shores of Lake Baikal [Black Sea?], The Postscript Murders is a literary mystery for fans of Antony Horowitz, Agatha Christie and anyone who’s ever wondered just how authors think up such realistic crimes…

PS: Trust no one. [goodreads]

I’ve corrected one part of the blurb which said Edinburgh instead of Aberdeen, and without checking, I’m sure it’s Black Sea that the Russians, Ukrainians and Peggy and her friend recall with affection….but I might be wrong on that one.

As you know, I’m an Elly Griffiths fan. I jumped at the chance of an ARC for this second crime mystery starring Harbinder Kaur, who’s British and comes from Shoreham, whenever anyone asks her where she’s from. I think she’s great.

The set-up for this story is great, too.  Somehow you are immediately drawn to Peggy. She doesn’t spend long with us, since she dies in the first chapter, but has a Prologue all to herself. The story zings along with all Griffiths’ trademark characterisation, twists, and red herrings. You don’t need to be a literary person to enjoy this, although since you probably enjoy a good crime novel, you’ll undoubtedly get all the references to the crime genre from Shakespeare to Dorothy L Sayers to [cough] Elly Griffiths. There are so many authors involved in this story, and so many titles bandied about, that it’s hard to keep track of which are real and which are, well, fiction.  I wonder whether Ms Griffiths fancies writing any of the great titles she’s invented (well, maybe not J D Monroe’s which are weird).

The descriptions of place really take you into the places visited.  I was convinced that the Majestic Hotel in Aberdeen didn’t exist  (confirmed in the Acknowledgements), but boy, does it sound like a description of the Station Hotel, of which I have fleeting, but fun memories! A crumbling warren, a Victorian edifice of granite, furnished with ultimate Scottishness throughout, including miniature stag’s heads woven into the corporate carpet. Actually I don’t think the Station Hotel had that, but I think the best hotel in Perth does something like it.

What is written in the Acknowledgements of books? It’s the key to this mystery. I kept wanting the amateur sleuths to realise they needed to go back to the beginning, and they did, eventually. So some of my ideas were right, but as usual, Ms Griffiths kept me well dazzled by the alternatives.

A throughly enjoyable read from a crime writing guru. Except for the ‘tell-tale signs of a single occupancy home.’ And what’s wrong with that, Elly?  Hugely recommended.