Thursday #writephoto is the inspiration of Sue Vincent.  Each week Sue posted a picture with a prompt and invited bloggers to make what they would of it – whether in poetry, prose or some other way.

This is now on hold as Sue is undergoing cancer treatment.  In a strange serendipity she got the news just as she was setting off to meet up with Mary Smith, who is blogging her cancer diary most Sundays (and may have had a bad week last week). And people on the list for notification of the Great Escapes Virtual Book Tours know that Lori (Dollycas) is also going through treatment. Please keep these people in your thoughts.

In support of Sue Vincent I decided to pick up some #writephoto prompts I missed. I’m going back a year. This was the prompt, a very snowy scene. 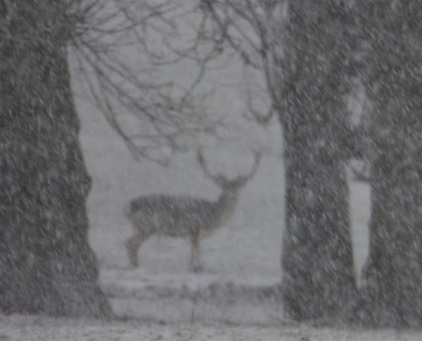 The October 17th 2019 was ‘Calling,’ showing a stag in a snowstorm between two trees.  Reminds me of last December’s Footprints in the snow!  Hm, maybe, there’s something to work on there… It’s just over 1000 words.

Winter had come early, or maybe it was just an early warning. Summer had burned in April and May, gone away and come back briefly, so why not winter, too? It was October, and the stag expected to be calling to his ladies, and challenging the young upstarts. Rutting season.

He found his favourite rock, cleared enough ice to scramble up, knowing the false footing below would hamper his spring.  Rising to his full magnificence, he stared around through the steadily falling snowflakes, then lowered his neck, and bellowed.

He could smell them, first. His ladies wafted through the wood, slipping silently among the grey-barked birches, playing hide-and-seek behind the great oaks. He leapt down, nosing them fore and aft as he reminded each of his love for her alone. He knew they exchanged gossip, but he would not wish any one to feel he did not value her loyalty above all.

As he moved he counted, and soon realised that last year’s eldest was no longer with them.

“Birchskin. you are eldest now.”

The yellow-mottled hind acknowledged his proclamation, although she had assumed the role at the start of the first heatwave.

What else had changed?

Two young hinds, outcast from another herd, had joined his ladies. He welcomed them in the traditional manner. They accepted his attentions gratefully. They had, after all, been well schooled by the herd over the summer.

“If you wish to stay with us, you must accept his attentions without question. He thinks he’s in charge.  Let him believe.  It’s easier this way.”

Every day the stag called his challenge, and every night he walked the rounds to keep the foxes and the wolves at bay. And also ensure no young buck decided to sneak someone away under cover of the night.

On the fifth day, his call was answered.  A challenge!

The herd rustled as they discussed who it might be. The young stag with the twisted left antler? The shaggy contemporary who had been beaten five years in a row already? Even in these deep woods there were not many left in calling distance.  The fires had seen to that. A great desert stretched between the largest forests. Combined, they had once covered several hundred square miles.

One day, a desperate young stag would cross the desert, but not in the snow. The going was treacherous even in good weather.

The next morning, a young stag with a twisted tine on his left antler strutted into the clearing, now packed with thin snow; mounds all around where the deer had pushed it aside to find food.

He snorted, squealed, and shouted his challenge at the mature stag standing on his rock at the end of the arena.

“How dare you present yourself as a challenger to me! You are hardly older than a blade of grass, and not as tall!” he scoffed.

“I am as tall as you, and stronger, faster, and younger!” The challenger had all the arrogance of youth.

Not even waiting for the senior stag, he bounded forward, head lowered, aiming to glance off the older stag’s shoulder and push him from his rock. The oldster timed his leap, and the challenger took a crash against the rock.  But he bounced, and threw himself in a one-eighty turn to face the old stag again.

The oldster whistled to his herd. Birchskin moved them all towards the aspen stand.  The oldster strutted in the other direction, haughtily ignoring the challenger, but with his eyes alert for the move that would surely come.  Again, he timed his feint perfectly, sidestepping the onrush, and adding a hefty kick to the challenger’s rump for good measure. The youngster wheeled around, determined to fight for these beautiful hinds.  He stood for a second, pawing the ground, before charging straight at their leader.

The clash of antlers echoed through the woods.  Yelling and hooting as they twisted each other, testing their strength, trying to throw the other down, and trample on him, but with little success.  They only broke off when impeded by trees, then they engaged with another echoing clash before any onlooker had time to draw breath. When the youngster twisted free, the older one got in a full bite onto his neck, and held on to shake him, break his neck if he could, punish him for his audacity.  The grip slipped under the energetic wriggling from the newcomer. He had strength and stamina.  How best to tire him out?

He chased the upstart.  In and out of the trees, over the rocks and streams. He knew where he was going, knew all the rocks even though they were snow covered. The youngster’s gallop showed his tension, trying to navigate and keep ahead of his opponent at the same time. And also, not to lose sight of those ladies. Neither stag wanted to risk a third stag nipping in and stealing them while the duel progressed.

Then suddenly, the picture changed. The youngster stumbled on a hidden log, and somersaulted to the ground, his foreleg anchoring him. Such a fall would have been the end of his life but for a lucky bend in the log itself.

The stag stood above his opponent, flanks heaving.  “Do you yield?”

“Will you leave and not return?”

The stag looked from the upstart to his herd. They watched him from their safe corner, chewing on some sustenance they’d found, ears twitching. They were impressed, but would never show it.

The stag lowered his head and sniffed the log. “I will move this towards the stream a little. Pull free as soon as you can.”

The challenger snorted his surprise and gratitude, and did as he was told. Such a great stag should be honoured. The stories about him were true. But as he limped off to recover, he vowed that next year, it would be his turn to watch the defeated one leave.

The stag returned to his rock. He bellowed his victory, and described his vanquished foe. Nobody near his territory was half as good as that one. He would take over eventually. But not this year.

This day was his, he called again to the whole white world.