Near + Far is a combination of two short story collections by Cat Rambo.  I understand that in the paperback they are put together in that format where you can start from either end, a sort of half upside-down book.  It is just continuous in the ebook, though. It’s been on my Kindle for over five years, and I think it was in an early storybundle I bought.

Near: Stories of the Near Future and the Far 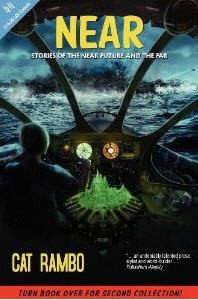 Two complete collections in one! Near: Stories of the Near Future and the Far, a publication containing two individual collections that harken back to the days of the Ace Doubles style (second work on inverted pages). Whether set in terrestrial oceans or on far-off space stations, Cat Rambo’s masterfully told stories explore themes of gender, despair, tragedy, and the triumph of both human and non-human alike. Cats talk, fur wraps itself around you, aliens overstay their welcome, and superheroes deal with everyday problems.
Contents:
…
*
[goodreads]

The stories in this book blew me away.  Cat Rambo is a master of her craft; these have been published in most of the best scifi anthologies and magazines around.

The first set deals with Earth or near-Earth stories, some dystopian, some spec fic. There is a fair amount of deadly or at least deadbeat relationship development in here, and Rambo admits that much of it emerged from her own troublesome break with her partner. Ones I particularly liked include the sensuous live fur coat, the society on the edge of a lake which was just doing its best to survive, and some of those involving androids.

The second group, Far, is set on other worlds.  Some link together, or at least share spaces or characters. Having developed one character, Rambo feels they deserve their own outing.  I know that feeling! These scifi stories sometimes delve into fantasy worlds, and many of them are from themed anthologies, which makes me want to track them down to see what the approach other authors took.

With a set of stories this big it is almost impossible to remember them all.  In fact, I found it impossible to read them all in one sitting. It’s probably taken me around three months.  The intensity of each story is overwhelming in bulk; I needed a break after a few, then after a couple, then after just one.

They also played to my insecurities as a writer.  These are so good, all published, all original and inventive. I think of my work and cry. Should I give up now? Or accept I am still a journeyman at best, and learn from this master?

A jewel in the crown of scifi and fantasy short stories, to be treasured by all who enjoy the shorter side of the genre.

One thought on “Book Review | Near + Far by Cat Rambo”