Here we are at the letter Q already – and blogging through the NATO Alphabet requires that I talk about Quebec.  But then again, it’s Saturday, and that means a book review.  I didn’t come up with too many books with Quebec in the title, and I didn’t want to feature a guidebook – after all, Quebec is not somewhere I’d been, so how was I to judge a guidebook?

Then by chance I found Chief Inspector Armand Gamache of the Sûreté du Québec.  It’s a crime series by Louise Penny, set in Quebec province, Canada.  And you may have noticed that I’m quite partial to the odd crime or two. (British understatement!) 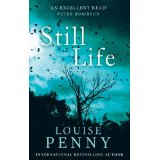 We open with a dead body, shot by a bow and arrow.  Who is the sparrow?  And for a short while we are introduced to the people of Three Pines, and guess who is to be the robin.  [ a reference to a British nursery song “Who Killed Cock Robin?”] Shortly after that we meet Chief Inspector Armand Gamache, his side-kick Jean Guy Beauvoir, the rest of his team and the rookie on it, Yvette Nichol.  She’s trying to prove herself, and just like the sidekick in Elizabeth George’s first Inspector Lynley mystery, she has a huge chip on her shoulder, a big mouth, and good brain which she doesn’t use properly.  They could be twins.  Is it a trope?  It irritated me hugely.

The story is both delightful and delightfully written.  Three Pines is a quaint town/village where nobody ever really leaves – as if they do, they come back again.  There are characters you know and love from your own experience – or wish you knew.  There are couples with secrets and old ladies with lies.  The characterisation is excellent, with occasional bon mots of wisdom thrown in.  I was fascinated by Myrna’s theory of loss – all our troubles being caused by some type of loss, and most of us recognise that and move on, but some just wallow in it.  Inspector Gamache’s observation of the victim’s bereaved dog, following its new carer: an old dog will always lick its owner and wag its tail before it dies.  Having written an emotion-filled story that morning, this simple statement moved me to tears, painfully reminding me of lost animals as well as humans.

The denouement is done well – I was right in my selection of the villain some way from the end, but it did not stop my enjoyment of the further red herrings and the eventual realisation of the rest of the protagonists in a thrilling conclusion.  Whether it is too obvious I can’t tell, but I think not.

Will I read more of this series – yes, probably, but I’m not in a rush.  I docked it a 5th star for a combination of the trope and some irritatingly poor formatting (why don’t these big publishers pay enough attention to the typos in their ebooks?).  It was fascinating to learn more about French Canadian culture and politics, too.

I bought this book with real money to fit into the A to Z Challenge!

If you haven’t already entered my AtoZ Giveaway, you can hop back to my B post and enter the rafflecopter there.  I hope you will!  Click the badge for a short-cut!

10 thoughts on “A Quebec book review”