I usually do book reviews on Saturdays, but couldn’t think of a book with diamonds in the title that I wanted to read.  But later I found I had one for next Saturday that needs mentioning today as well…  Read on! 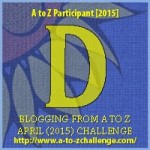 D is for Diamonds in my journey through natural phenomena.  They’re just a chunk of carbon, really.  So is coal, graphite, corundum…  If you look at a chunk of black coal (a purer version than brown coal) you can see wonderfully sleek planes where the structure has sheered, but otherwise, well, it’s a lump of black stuff, isn’t it?  (read the Wikipedia entry for the mineralogy of diamond)

How come diamonds are so amazing that people will kill for them?  I suppose I’m lucky that I’m not hugely attracted to them; I’m not lured by them or spellbound by them – not that I’ve had huge experience.  I’ve seen big ones in the Crown Jewels at the Tower of London, and they do look nice, very sparkly, and I do have some industrial sized ones in a ring my mother left me, but that’s more the memory than the look or value.

But the history surrounding these special forms – allotropes – of carbon is intriguing.  Symbols of power and wealth, often exchanged for obscene sums of money (or obscene suffering of others).  The mystique of diamonds is legendary – and controversial. 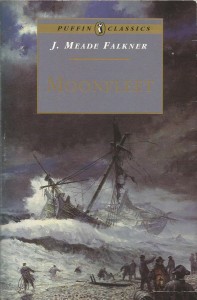 So it is with Blackbeard’s diamond, which is the root of the action in J Meade Falkner’s Moonfleet.  I re-read this recently, having read it as a kid, and having always been fascinated by smuggling (and the Dorset coast) I was surprised to find that I’d forgotten entirely the heart of the story was not the smuggling of brandy, not really, but the finding of Blackbeard’s treasure and the ruin that it brought on people who handled it.

It’s told in that mannered way of classics of its time, like Treasure Island it takes a bit of getting used to.  But it flows and ebbs with the tide, and I found myself writing lyrically after reading it, in a way that sort of sticks in your soul.  But the adventure – and the cruelty – are amazing.  If you want a good adventure story, this is it.

I’ll finish reviewing it next week, which was when I originally planned to use it.  Come back next Saturday to see what amazing phenomenon my J stands for!

Diamond pic from www.joyeriakohinoor.com; scan of the book cover my own (bought for 50p in the Wroxham station bookshop).

Diamonds (and half a book review)

17 thoughts on “Diamonds (and half a book review)”