These both qualify for entries in The BookShelf Gargoyle’s Oddity Odyssey, for me, at any rate.  They are united in their alternative realities and bickering.  Lots of bickering!  They both really good reads, though. 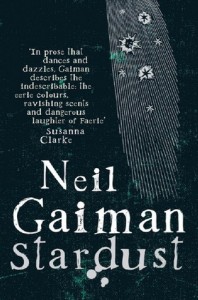 I’m not sure that I should be critical of a Neil Gaiman book, but it’s definitely odd.  It starts like a Middle Grade book, but gets both darker and more adult, yet keeps the fairytale approach going, which makes you wonder.  But wonder is the name of the game, and it is definitely a fairytale for adults, with some wonderful flights of the imagination, and many weird goings-on.  Yet the protagonist is a young man of the YA variety, and his romance with a fairy is the heart of the story.  They bicker and squabble and it all seems very real, except for the situation in which they are mired.  Mired literally at times.  The antagonist and his adventures are particularly well done, although sometimes the three (or is it four?) strands to the plot seem so very different, you wonder what’s going on.

Unusually for me, I might re-read it, to see if I gain more from it next time.  Maybe I just need to get in touch with my inner child better. 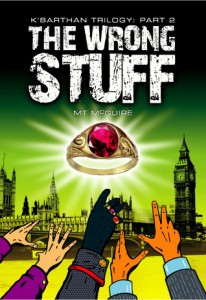 I am a fan of this series, but that doesn’t mean that it isn’t odd!  McGuire has some truly wonderful inventions in her tale of parallel universes that collide, most of which we met in the first book Few Are Chosen.  Except that the female protagonist, Ruth, didn’t, so she is discovering them wholly anew – and she is from our version of Earth reality, whereas The Pan of Hamgee is not, and neither is Lord Vernon, who is pursuing them mercilessly.  He’s not big on mercy at the best of times, and especially not when he intends to marry Ruth, who is, whether she likes it or not, destined to be The Chosen one, in their mythology.  And if Lord Vernon wants supreme power, he has to marry her and make out it was his destiny.  And since the Pan fell in love with her the moment he saw her, he’s intent on thwarting Lord Vernon at every turn.

There are lots of turns.  There are lots of chases, escapes, chases, escapes, near-findings by Lord Vernon and impossible escapes.  It is fast-paced and delightful, although I did get a bit fed up with Ruth and the Pan arguing/discussing/bickering/persuading her that she was, indeed the Chosen.  And although we know what the Pan’s problem is from earlier than halfway, he still hasn’t worked it out by the end of the book, which, to my absolute horror, was a cliffhanger.  And you know how much I HATE SERIES WITH CLIFFHANGER ENDINGS.

But, since I already have the next two books of the Trilogy on my kindle (yes, I have counted that right), I can just get on and read it, and enjoy the utterly brilliant madness of it all.

3 thoughts on “Double Book Review | Stardust and The Wrong Stuff”