This Giveaway Hop from Stuck in Books is one of my favourites, and allows me to showcase one of the books I read this year that I had to be dragged away from if I couldn’t finish it in one sitting.

There are four contenders:

The Good Liar by Nicholas Searle

The Last Pilot by Benjamin Johncock

And since I reviewed the others in the summer (click the titles for the reviews) today’s review is The Martian.  After that is the Giveaway and the hop list! 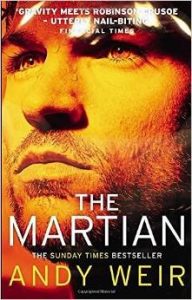 The bestseller behind the major film from Ridley Scott, starring Matt Damon and Jessica Chastain.

I have no way to communicate with Earth.

I’m in a Habitat designed to last 31 days.

If the Oxygenator breaks down, I’ll suffocate. If the Water Reclaimer breaks down, I’ll die of thirst. If the Hab breaches, I’ll just kind of explode. If none of those things happen, I’ll eventually run out of food and starve to death.

Wow!  This is a truly gripping adventure.  If it wasn’t enough to be on a mission to Mars that goes horribly wrong, things keep going wrong every time it looks like he’s sorting himself out.  And eventually we get to see what’s happening back home, with some strange decisions being made ‘to protect the mission’ and later ‘to minimise collateral damage’ and other equally obnoxious double-speak – my interpretation, I don’t think the author used those words.

I particularly enjoyed the emotional development that went on with numerous characters in this show, not just the Martian himself.  In some ways the Martian reminded me of my brother and some friends – that same aura of calm under pressure and ability to dang well sort something out that works!  I wonder whether the author really meant for the mission controllers to have so little faith in the strenuous selection tests they’d put the astronauts through.  In that, I think it echoed the Apollo 13 film – people concerned over their own piece of the mission and not giving the astronauts credit for resourcefulness.

There were plenty of twists and turns, many unexpected, although at one stage I did get fed up with the thwarting of every positive step.  Relentless bad luck can pall.  However, I liked the style of the diary, and the cuts back to Earth, and eventually back to the rest of the crew, and I really enjoyed the science element of the fiction!

I haven’t seen the film, but the book is terrific, and I’ve given it five stars everywhere.

The PRIZE is one copy of one of the books above, in ebook or paperback form, anywhere in the world, provided Book Depository delivers to you free of charge..

Raffle valid only in countries where this type of draw is legal.  You must be 18 or over to take part.

Don’t miss my Guest Post on The Story Reading Ape on Sunday 9th. See it here!

Book Review and Giveaway Hop | Stuck in a Good Book