The Roanoke Girls came from the publisher via Net-Galley.  Thank you very much.  I’d heard some whispers about this one, so either the marketing worked, or the word-of-mouth. After I read it, I wish I’d listened closer.  I thought it had been out for a while, but maybe this is a new paperback edition for the UK, launched on Thursday. Don’t let that fool you. 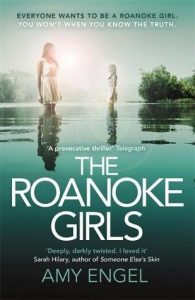 Vowing to discover the fate of her missing cousin, a woman returns to her family’s Kansas estate where she spent one haunting summer as a teen, and where she discovered the dark heart of the Roanoke clan that left her no choice but to run.

Lane Roanoke is fifteen when she comes to live with her maternal grandparents and fireball cousin, Allegra, at the Roanoke family estate in rural Osage Flats, Kansas, following the suicide of her mother. Lane knows little of her mother’s family, other than the fact that her mother ran away years before and cut off all contact with her parents. Allegra, abandoned by her own mother at birth and raised by her grandparents, introduces Lane to small-town life and the benefits of being one of the rich and beautiful Roanoke girls. But there is darkness at the heart of the Roanoke family, and when Lane discovers its insidious pull she has no choice but to run, as far and as fast as she can.

Eleven years later, Lane is scraping by in Los Angeles when her grandfather calls with the news that Allegra has gone missing. “Come home,” he beckons. Unable to resist his pleas, Lane returns to Osage Flats, determined to find her cousin and assuage her own guilt at having left Allegra behind all those years ago. Her return might mean a second chance with Cooper, the boyfriend whom she loved and destroyed that fateful summer. But it also means facing the terrible secret that made her flee, one she may not be strong enough to run from again.

Some books should come with a Government Health Warning.  This is one of them.  Very little in the blurb gives any indication of the depths of depravity that lurk at Roanoke. The “terrible secret” in the blurb is just not strong enough.  I wonder at the author’s own sanity in writing such a tale, where incest and grooming, and their insidious preying on developing children’s minds, are the key to the whole plot.

I’m sorry if that ‘spoils’ it for you, but the suspicion comes early, when grandfather puts his hand on the young girl’s knee and lets his pinkie slip under the hem of her shorts. If, like an astounding percentage of women of a certain age, of all classes and colours, you have been subject to sexual predation, you will do well to avoid this book, and to put it out of your mind.  You do not need to relive any of your youth.  You do not need to re-examine the things that made you fight to remain the kind and balanced person that you are striving to be.

The terrifying thing is that Amy Engel has captured the psychology of everyone involved so well.  She writes mostly with a vivid certainty that you will experience the heat and desolation of rural Kansas on every page. Occasionally she puts so much craft into her writing that it stands out; too much, Amy, too much.  I only highlighted one overblown description early on, but when she gets into description she just goes on, and on, searching for the most perfect, the least clichéd, the most original turn of phrase ever – so much so it becomes painful. She could have cut a couple of pages of Lane’s mental self-flagellation in the end sequence – or was it self-discovery, I couldn’t be bothered to work out which, since I had long distanced my emotions from the turmoil within the pages.

I’m not giving you the Goodreads link.  The Roanoke Girls will probably win prizes.  It will probably be hailed as an important book by right-wingers, especially those that welcome the final judgement on the grandfather.  It will probably, heaven help us, be read as a set book in high school five years down the road.

I suppose what incensed me most (if that is possible) was the cool ‘questions for reading groups’ at the end.  Someone expects it to be a set text, obviously.  Personally I think it should carry that referral information you get after some tv programmes:

If you, or someone close to you, have been affected by the contents of this programme[book], you can get help and counselling at this number…..

And I’m a lucky one. I discovered the source of my hang-ups in the Magdelene Sisters.

3 thoughts on “Book Review | The Roanoke Girls by Amy Engel”