The Ship Who Sang, by Anne McCaffrey, was picked as the book of the month for August by the Goodreads Space Opera Group.  Despite all the others on my plate, I jumped at the chance to reread something I remembered most fondly. I gave it five stars when I first listed my ‘read’ books when I joined Goodreads in 2012.  I’d read it as a teen or twenty-something.  Would it stand the test of time?

The Ship Who Sang 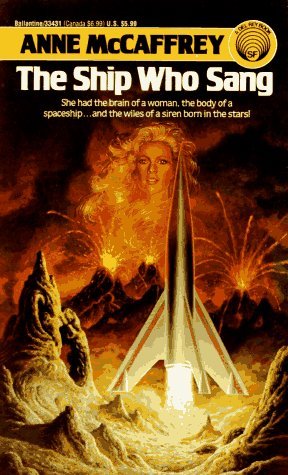 Helva had been born human, but only her brain had been saved and implanted into the titanium body of an intergalactic scout ship. But first she had to choose a human partner, to soar with her through the daring adventures and exhilarating escapades in space. [Goodreads]

It’s not much of a blurb, but for one of the iconic books of the late 60s & 70s scifi, it says enough. Anne McCaffrey’s invention of Brainships (this became number 1 in the Brainships series) was a masterstroke, and hard for other writers to ignore.  It took all the consideration of AI becoming self-aware and taking over the ship (as in 2001: A Space Odyssey) and turned it on its head. McCaffrey let them populate all her worlds, and it is sometimes hard to leave them out of my own writing.

In some ways, The Ship Who Sang shows its age.  In others, it is still brilliantly ahead of its time. There is a mere nod to the possibility of female space pilots. The idea that human eggs could be fertilised outside the body and grown in special tanks was astounding. The first test-tube baby arrived in 1978.  The first sheep wasn’t cloned until 1996. The development of space flight, and the networks of brain & brawn ships, as the unadjusted human partner was termed, are still mind-blowingly in the future…  Attitudes of the men involved tend towards the seventies military/corporate business culture (to distinguish it from post-hippy culture).  Women tended to be moving forward in the fight for equality.  In some cultures they succeeded more than others; the book reflects this, with many female characters in leading scientist roles.

The writing is of its time too.  Easy to read, somewhat more descriptive than today’s fashion.  The structure of the book is more episodic than  continuous narrative divided by chapters.  The book lends itself to episodes, since Helva’s work is in discreet projects, and mostly with different partners.  The linkages develop, along with Helva’s personality, in the best Anne McCaffrey style.  The voice of some characters (particularly those who are just voices through comms) develops beautifully.  My only criticism? The making of the final partnership, which seemed so obvious to me, is somewhat drawn out.

Is it still a five star read?  Maybe it’s lost some of the sparkle, some of the originality, simply due to those we have seen since.  I did dock it half a star, but it’s mainly style. One of the episodes is a bit stodgy, but it’s critical to the rest. I think some of the other Brainship stories are worth reviewing again, but I’ve read the Killashandra books so many times that I was up to date on many of the crossovers anyway.  Maybe they should just stay in my heart, or read for reminiscence rather than review.

I still think it should be read by any scifi lover, though—or anyone who wants a warm-hearted story about love, loss and finding oneself again.

Book Review | The Ship Who Sang

4 thoughts on “Book Review | The Ship Who Sang”