Story ideas arriving out of the blue is something most authors dream of.  I dream of lots of stories, the trouble is remembering anything about them long enough to write it down. Last week I went to an event as part of Norwich Science Festival, and I thought any Insecure Writer, especially those of you doing NaNoWriMo this month, might like what happened to me there. 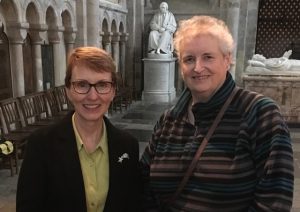 Helen Sharman is the first Briton to go into space. There have been two American citizens born in Britain who took US nationality to have a chance; an American and a South African with dual nationality (i.e. UK), and two self-funded space tourists to the ISS. [wikipedia] Tim Peake, the most celebrated British astronaut, went to the International Space Station in 2015. He spent six months there and came home to be heralded by many as the first British astronaut. He was under the UK Government-funded ESA programme, whereas Helen’s participation in the Juno programme was merely funded by UK citizens. Helen’s back-up for her flight, Tim Mace, did all the training but never flew.

Helen emerged from her private life to do educational work and appearances again, once the thirst for all things space grabbed the British public with Tim Peake’s adventure.  I was delighted to see that she was speaking at the Norwich Science Festival, and booked a ticket immediately.  Thus I gained an entry to see and speak with her after the main event.  I’m hoping her presentation will be on the festival website, if you’re interested in the ups and downs of her trip. It’s really interesting, with all sorts of fascinating insights.

I don’t know about you, but I often get ideas for stories when listening to interesting people. I suppose something they say rings a bell and I think “What if x happened instead?”  Fortunately I’m usually awake when these ideas arrive, and generally hold on to them long enough to make a note.  I add these to a list on my computer—I have to say that’s getting rather long, although from time to time I notice I’ve used part of an idea in a flash fiction.  It’s probably been in my brain all the time, festering… 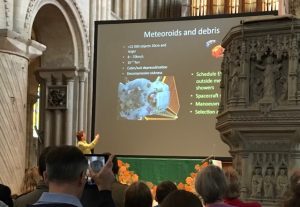 With Helen’s event, I noted some specifics I’d like to find out about if I could.  One of the problems of writing science fiction is that some things about space you only know if you’ve been there.  Researching is hard, because sometimes you think “It would be much easier to just ask an astronaut.” But I wrote out a list of things I’m uncertain of in my Viridian System series.  Even if I am inventing ‘future science’ a lot of the time, there are basics of the way the universe works that just won’t change.

I decided that my idea of a suction machine that would attract small items of space matter through a vacuum, because they have mass, was not the sort of thing that Helen’s experience would cover. She is a chemist by profession. She carried out various science projects on things like plant growth and the effects of space on human physiology while she was on Mir.

That jelled with me.  She spoke about the experiments she carried out on plant growth—potato roots growing in all directions, lettuces growing from seed. Tim Peake grew lettuces and ate them on the ISS, but they haven’t got fruits to develop yet. In fact they haven’t got flowering plants to flower yet. The scientists think it’s to do with the balance of atmospheric gases.

Well, potato roots growing in all directions sounds like an ideal horror flash fiction to me! 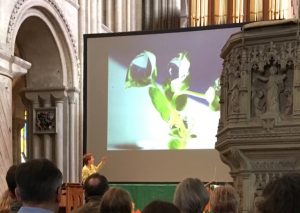 More directly, in the session afterwards, I asked Helen more about these experiments.  We talked about the discovery that roots grow towards a strong magnet. Was this in place of gravity, or it actually was because of magnetism of the earth’s core?  I made the connection immediately, and she grinned. We also talked about climbing plants such as beans. On earth they grow in the directions appropriate to the Coriolis force, just like ocean currents and weather systems (and water going down the plughole).  And I’m thinking—in my second Viridian System book, Curved Space to Corsair, I already have my spacers growing plants.  I’m sure I can make something more of this. I have sentient trees in this universe; why not have other things growing there—or are they growing on magnets, and the magnets solve another problem?

Well, you may see where I’m going. One thread leads to another. I don’t know where it’s going myself yet. That’s the trouble with story ideas, you head off down some interesting routes and then have to take a reality check.

Don’t get stuck on NaNoWriMo

If you are writing away for NaNoWriMo, you don’t need to do that reality check at this stage. Just keep writing. You can do more research, and the edits, later.  Just get your story down and your wordcount up.

The time for researching the validity of your developments comes later.  But keep an eye out for new opportunities, all the time.  And if you get a chance to go and see a speaker on any subject that might relate to your topic, go!  You may come out with even more story ideas!

The theme for IWSG this month was NaNoWriMo, and because I’m not doing NaNo, I didn’t think I’d have anything to say on the theme. So it just goes to show, everything is relevant to writing.

Thank you to our co-hosts this month, and check out the IWSG sign-up page to sign up or visit other participants.
Co-Hosts: Tonja Drecker, Diane Burton,  MJ Fifield, and Rebecca Douglass!

#IWSG When story ideas fall into your lap

19 thoughts on “#IWSG When story ideas fall into your lap”