Recovering Apollo 8 possibly came in a StoryBundle. It was certainly what attracted me to the bundle if so.  The blurb draws you in, the author is prolific, and well-spoken of in scifi circles, and I was pleased to find one of Kristine Kathryn Rusch’s to investigate further. 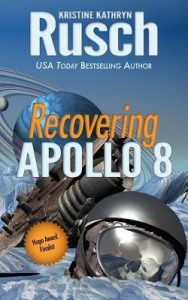 In a world where Apollo 8 veered tragically off course, the event sent the astronauts, and the space program, hurtling into space, lost and helpless. The tragedy so affected eight-year-old Richard Johansenn that he dedicates his life—and the fortune he amasses along the way—to recovering the capsule. But Richard’s quest proves more complicated than a simple recovery mission, causing him to question the meaning of life, the meaning of death and the heroisms in between.[Goodreads]

This is a short book, listed at 118 pages in paperback, but it was definitely a quick read.  That’s not a criticism!  It does its job well, keeps you rolling along with the episodes, and keen to see how the whole thing pans out.

The first episode presents the eight-year-old Richard Johansenn watching the skies as the Apollo 8 mission veers off course.  Then we see that this was a false memory, a romanticised one, but his obsession with the moment the Apollo mission went wrong is no less real for that.  Maybe you’re good with numbers and wonder why we are Recovering Apollo 8. For those of you with a less than clear memory of the numbers in the Apollo program, our Apollo 8 went round the dark side of the Moon for the very first time, sending back pictures on Christmas Day.  This one is an alternative timeline!

Richard Johansenn studies pretty hard; he’s a geek, and things come easily to him.  His vision drives him onwards: he wants to know what happened to the astronauts.  The episodes jump to times when he manages to explore that obsession.  We cut to a time when he has developed his engineering companies enough to be a passenger on his own craft under NASA’s wing when they find the capsule (using Richard’s technologies). After that we jump several more years into the future as further developments in both plot and technology give us new adventures.

I love the way the author crafted Recovering Apollo 8.  The personalities, of Richard and his staff, are so typical of technology companies.  The politics of space travel are brought into play.  The world-building as technology changes both everyday life and the space action is logical and technically sound, given the usual requirements for future science to at least parallel what we know now.  I really enjoyed the book, and I’ll be adding this author to my favourites!  I find it so hard to judge the sort of scifi I like from the blurbs!

Engrossing novella about a man with a dream. Full of rich believable space detail, human interest, geek interaction and undiplomatic diplomats, all in a parallel universe. And a swerving twist at the end. Great read, and a good antidote to some of the very long books I’ve read recently.