My First Wild Wednesday: I promised to do these posts monthly (or maybe more often) after my #30DaysWild challenge last month.  I also let the 30 Days Wild team know, and they suggested using the hashtag #StayWild to keep involved with others blogging about wildness.  So I’m dropping the wild Wednesday tag in favour of that. 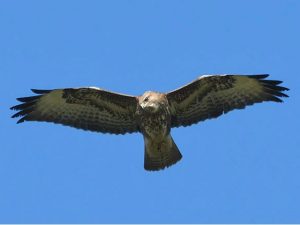 Coffee with a Buzzard

My Random Act of Wildness this week was pretty easy.  I was having coffee, doing the Sudoku and maybe failing to do the crossword puzzle, when I had a mewing noise.

Sure enough, there above me was a buzzard.  He was being mobbed by a crow, probably chasing the buzzard away from its own family.  The crow seemed to decide the buzzard was now far enough away and flew off after they’d passed my house, but the buzzard kept wheeling around on the thermals. That may mean there’s a lot of hot air coming from my house.

I didn’t think to dash inside and grab something to take a photo, which was a shame as he was quite low at first.

We first started seeing buzzards here about five years ago.  Buzzards were a rarity in Norfolk until then; we were more likely to see marsh harriers.  Those are definitely not common in the rest of the UK, but we had got pairs breeding at Minsmere, and then the offspring took up residence at the Strumpshaw and Buckenham marshes, and at Cley, and Titchwell, and they kept on spreading.  I remember bird-watching around ten years ago (I think we were at Cley) and the birder next to me exclaimed “oh my god, it’s a marsh harrier!”  And I said, yes, the breed here, or some such.  And he was so excited to see one I asked where he was from.  Of course, you forget that your local birds can be rarities elsewhere.

So I’m sure most birders in the country would have the same reaction as when we first started having buzzards over our houses.  I used to record them as rarities, but about three years ago they bred, probably in nearby woods, in much the same area as our resident sparrowhawk.  They don’;t seem to have a problem sharing the wood, as they’ve successfully reared youngsters for several years now.

So with buzzards no longer causing excitement in Norfolk, the next thing was the spread of the red kite.

For several decades if not longer, the red kite was virtually unknown in the UK, a victim of indiscriminate trapping and poisoning by gamekeepers and farmers.  There was an enclave of them in Mid Wales, and when I went to see my niece at university at Aberystwyth(which must be fifteen years ago) we went to see them being fed.  That is, feeding time on a farm, for wild red kites. (I’m still hunting for my photos).

A little earlier, I think, the kites were re-introduced to a wooded hillside on the steep slopes of the Chilterns, just where the M40 motorway goes down onto the Oxford Plain, a place called Stokenchurch.  For some of us, it was a highlight of the M40, looking out for the kites.  That was so successful, I believe they tried reintroduction programmes elsewhere. 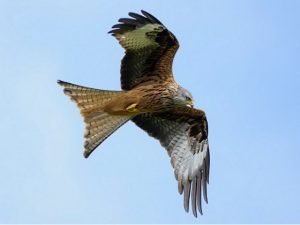 Come back next month for another Wild Wednesday.