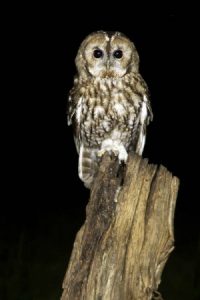 There are two Tawny Owl Surveys running in the UK at present – well, one underway and the other about to start.  Anyone can take part in the second one, doing it from your own home.  The first tawny owl survey is a little more complex, but not difficult.

Tawny owls are common in the UK, even in well-lit areas, if there is sufficient vegetation for them.  I’m not sure they’ve taken to tall buildings like kestrels, and peregrines, but we’ll probably find out through this survey. In fact, the effect of light pollution and urbanisation on the population are key research questions for the BTO.  That’s why the surveys are being done.

BTO does much of its survey work using ordinary people to watch or listen for birds regularly, make structured records and send them in.  I told you a little about them in June. This could be your chance to add to scientific findings – it’s called ‘citizen science’.

This survey runs from 30 September to 31 March, and asks you to listen out for Tawny Owl calls over twenty minutes, once a week.  There’s a recording form (or app) you use to submit your counts.

The survey is run by the British Trust for Ornithology (BTO), and you can read more about it here.

I’ll be doing it, and I’ll give you updates from time to time here.

This is a more detailed survey, which I’m doing at present.  The idea is to go to a specified spot and listen for Tawny Owl calls (t-wits) and songs (t-woos) and work out how many territories are around the specified spot.

The scientists at BTO identify areas they want to cover (a sample spread around the country), and asked for volunteers to sign up for specified spots.  I signed up for one, within a mile of my home, and read all the information about the survey.  Once it got to the starting date (15th August), I realised that there was an unbooked survey spot along the same narrow country road only one kilometre further on, and the survey methodology meant I could do my original spot, then drive along to the second spot and do that before the time window ran out.  So I signed up for the second one as well.

The survey had to be done twice, both visits within two weeks, with an option to do a third.

The most complicated bit was working out what day to do it on.  As the infographic shows, my best chance would be an evening with little wind, a good moon, not too much cloud, and, even more important, when I was free!

I did a daylight run to identify where to park the car; the roads were tiny and mostly unused, so I didn’t expect to be in the way of anyone after dark, but still found a spot off the road surface.

Since the owls around my house had only emerged around 2 hours after sunset, I was a little dubious about the instructions to complete the survey within two hours of sunset.  But, having checked with my local organiser, I set out an hour after sundown (19:49) to drive for a whole five minutes to get to my chosen spot.  It looks different in the dark!  I missed my turning and had to reverse down a single track lane.  But I found a gateway to turn in, and the place was absolutely deserted, so no problem, really.

It was a lovely night, sky colour still in the west, and streaks of cloud around.  I’d checked earlier to see there was only very thin cloud, and eventually some star started appearing above the horizon, so I reckoned the cloud was clearing.

The first thing I heard was a zizz-zizz of possibly a lapwing, although a bit late for that.  Could also be a jacksnipe drumming, but that would only be in spring, or so I thought.  Anyway, it wasn’t an owl.

The sound of the cars on the road in the valley carried well up here on the hill.  It’s farmland, so I had a few hedges in sight, and clusters of trees in the distance, silhouetted against the sky.  The only other sound was the hotel over a mile away, which had party music going (and later fireworks, so probably a wedding)… I wondered if it would drown out the hoot of an owl.

Halfway through the second ten minutes came a kee-vik, a tawny owl call, from the north, the direction of the village.  Just the one, quite loud.

Time up, I drove the kilometre to my second survey point, along the same road, spotting a hare in my lights as I went.

This was at a road junction.  I call it road – single lane roads with a touch of grass growing down the middle!  There was a patch of grass in the triangle of the junction and I parked my car on it.  The three arms of the road gave me some choices, since there were more trees at the side and not such a view over the landscape.  I heard a soft tawny owl call quite a way off to the south – so definitely not the other one moving about.  The second ten minutes I spent mainly looking at the stars, since the cloud had cleared and it was a beautiful night.  A quick shooting star and several planes blinking across livened up the evening (although the music was still audible).

Time up and I drove back the way I came, still with no other cars or people in sight, and the red moon rising in front of me.

I ended up doing the first night later than planned, because it’s been windy.  So I have until this Thursday to do the second night… and it’s been windy or too cloudy. But there should be a moon this time, so hopefully there’ll be more owls. And I might remember to bring my iPad….