A Little History of British Gardening was a Christmas present last year, no, the year before now. I started reading in October. I finally finished it on Boxing Day.  It is much longer than expected, with much smaller typeface than her other books I’ve read. And it falls into that class of Christmas presents which are, let’s say, ‘disappointing’.

A Little History of British Gardening 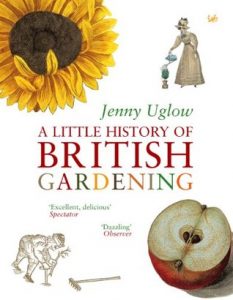 Did the Romans have rakes? Did the monks get muddy? Did the potato seem really, really weird when it arrived on our shores?

This lively ‘potted’ history of British gardening takes us on a garden tour from the thorn hedges around prehistoric settlements to the rage for decking and ornamental grasses today. It tracks down the ordinary folk who worked the earth – the apprentice boys and weeding women, the florists and nursery gardeners – as well as aristocrats and grand designers and famous plant-hunters. Coloured by Jenny Uglow’s own love for plants, and brought to life in the many vivid illustrations, it deals not only with flowery meads, grottoes and vistas, landscapes and ha-has, parks and allotments, but tells you, for example, how the Tudors made their curious knots; how housewives used herbs to stop freckles; how the suburbs dug for victory in World War II.

With a brief guide to particular historic or evocative gardens open to the public, this is a book to put in your pocket when planning a summer day out – but also to read in your deckchair with a glass of cold wine, when dead-heading is simply too much.[goodreads]

Jenny Uglow has done splendid work in delving deep into the history of British gardening and displaying it in all its twists and turns, or meanders around the shrubberies, or walks in the park.

However ‘Little’ history is a misnomer, and what was interesting when it was the Romans and Saxons, had become repetitive by midway through the book when we were already past the Regency period. This left the majority of the rest of the book to the Victorians. Yes, it was amazing the places they went and the things they brought back, but in the telling it became simple repetition with a few different names thrown in here and there.

It does become obvious that everything in garden goes around in circles, so that while the upper classes move onto bedding, the lower classes are thinking wild and interesting. Then they discover that bedding is what the upper classes are doing, and when the toffs notice, they start another trend, perilously close to wildflower gardening…

And as that’s been going on since the 1700s, and it’s still going on now, it’s made me somewhat depressed about my own garden.  I recommend Monty Don’s splendid TV series such as Around the World in 80 Gardens.  Or his Italian or French Gardens. Or his Secret History of the British Garden. You get all the history with the scenery thrown in.  Well, not the bit about the Saxons.  That was interesting, unless you have a lot of Cistercian monasteries in your neck of the woods.

Oh, and my grammar checker is slating the readability index of the blurb. Says a lot for the book, too. But it did contribute to my Non-fiction Adventure Reading Challenge.

5 thoughts on “Book Review | A Little History of British Gardening”