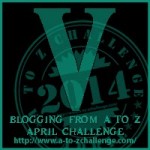 Victor. I meant to use the post I did for the NATO Alphabet in 2014, but it was an excerpt about the storm in his book, Bravo Victor, where he hides under his bed.  I’m sure I’ve used that recently, so I looked at the post I did in 2017. This turns out quite long, as it gives you a feel for his character, and then does an interview.

Victor has appeared on the A to Z several times – in 2014 when I was about to launch his book Bravo Victor (Book 6 of the Princelings of the East), my theme was the phonetic alphabet.  That gave me ample opportunity to plug the book!  Guinea pig Victor also ran George’s Guinea Pig World.  The blog is run by Kevin and Percy [in 2017], who are blogging from A to Z this year, as Victor did in 2012, and Dylan and Dougall (who star in Book 8 of the Princelings of the East) did in 2015. 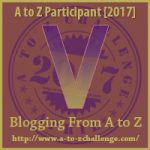 Victor ran along with the others, trying not to bump into things. He was enjoying the adventure but trying to work out how long he’d been away from the Inn and whether he was due to start his course work in a few days or had a little longer.  He was studying for a Masters in Business Administration and he didn’t want his career in commerce to be cut short by a pirate.

Victor was studying for a Masters in Business Administration and he didn’t want his career in commerce to be cut short by a pirate. V for Victor #atozchallenge2019 Click To Tweet

Don’t forget to enter the giveaway for a chance to win lots of book and ebook prizes. It appears under letter B – for Bravo!

I think it’s only fair that I should tell you that the current custodians of George’s Guinea Pig World are Roscoe and Bertie.  They asked if they could do the AtoZ, and I suggested they might find it easier to blog from A to Z once a week.  So they’re now on letter D.  If you fancy dropping by to support them between now and September, when they’ll finish, I’m sure they’d be very grateful!