The Unwinding: Gin’s Story came as a Net-galley suggestion. Juliana Rew is the editor of the Third Flatiron Anthologies, so I was keen to see what sort of book she wrote herself.  I am now totally insecure as a writer. I don’t know if I can ever submit to her anthologies again. Why? Well, this book is just too brilliant.

And it’s another for my SpaceTime Reading Challenge, which means I’ve nearly hit my goal already. 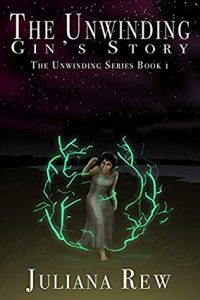 Korean-American housewife Virginia Sun-Jones and her husband are enjoying a Christmas picnic on the North Carolina beach with their newly married daughter and son-in-law, when a shattering cosmic event, the “Unwinding,” rips them all apart. Caught in a duel between warring universes, Gin embarks on a cosmic quest to be reunited with her family.

Virginia Sun-Jones would be the first to tell you that riding a whiskered Korean water dragon as transport is not for everyone. But ever since the Unwinding scattered her family, she’s followed a breadcrumb trail of clues, hoping to find them. Gin can’t shake the feeling that with recent events the universe has a personal interest in what’s been happening to her, as she discovers special quantum abilities and ventures away from this tiny haven known as Earth. With the aid of an time-traveling civilization known as the Watchmen, she fights a despotic galactic emperor seeking to destroy our universe.

This is one of those books you think about after you’ve had to put it down. Then you look forward to having enough of a time gap to get back to it.  It drags you in for hours after that – I think I only had three sessions with it.

It starts with an ordinary-ish family going to the beach in an ordinary way.  Once on the beach, Gin’s world unwinds… an apt term she gives to the way her world falls, not just apart, but into multi-dimensional strands.

We get thrown with her into historical times, and then into the future, or is it just a parallel universe?

We are following the clues to what is going on, just as Gin is, so it’s part detective story as well.  And, as with all good detective stories, superior knowledge is being bandied about to help us readers get one step ahead of Gin. A one-sided commentary on Gin’s progress comes from someone (or something) reporting to… someone else. It’s intriguing!

This book delves into time and space on a cosmic scale. It considers how the universe develops, and whether our universe is colliding with another, and what might happen as a result. Or maybe it has already happened, and some entity is stuffing dark matter into it so as to dampen the effects of this extra-universe intrusion. Maybe we should do some statistical analysis on the Big Bang and see…

lost in the science

It’s a very clever book, very well written, and I didn’t get lost with either the people or the places involved, which as you know is a minor miracle these days. Even better, I didn’t get lost in the science. I don’t understand string theory and the like, but I’ve got up to date enough to hang in with the terminology.  I suggest that’s a must if you want to enjoy the read.

I loved this book. But there is the indication of a series, and I’m not sure that I want that. Minds should only be blown once every few years, perhaps, and this was mind-blowingly excellent.

PS It was very late being posted on Goodreads, and the cover that was there at first has disappeared.  Good thing I grabbed it when I saw it, but it may not be the final version.