The Mostly Invisible Boy was a Great Middle Grade Reads book of the month – for June! I managed to read it before the end of July, which is a vast improvement on my recent performances. This was the Group’s annual indie-published book.  I keep hoping they’ll pick one of mine, one day! 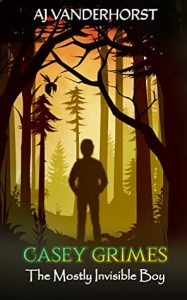 by A J Vanderhorst

Eleven-year-old Casey Grimes is invisible. Really. When he leaves suburbia and infiltrates a secret forest society, he can finally be seen—but Sylvan Woods hates outsiders as much as it loves killing monsters. As Butcher Beasts invade, his flimsy cover story falls apart, and courage is his only chance to belong. [goodreads]

This is a great story, a fantasy with many original features. It develops in a dark fight against nasty beasts set on destroying the world, or so it seems.

It starts out on the last day of the school term, with Casey railing against his problem. People can’t see him. Sometimes it seems they’re going to and then… no. This period of his story is important to explain several things about his attitude to life. Invisibility been going on a long time. So, once his parents are despatched into the middle-grade land of absentness in a very inventive way (would anyone really do that?), Casey and his sister are free to explore. I kept expecting the strange babysitter to turn up in the woodland, but no, she kept herself to her role in sitting the house. This enabled a great story for Casey and his sister Gloria.

I loved the way this was all put together. I did get somewhat lost with the mechanisms for travelling about, and my mental picture may be my own invention. There were some things about editing that I would have preferred to have been improved: I felt there were some continuity issues. I had to turn back and check, anyway. Not finding the answer I shrugged and moved on. But part of this could be modern speech. Things kids say are often a mystery to me!  The eyes also did strange things, like pin themselves to the side of his face. Umm? Sometimes I thought I understood–the goldfish eyes were superb! Other times I really don’t know what was intended.

But it’s a first book, and a first of many, and I’m sure the author will, as I do, look back on it and cringe occasionally, once he’s got to the fifth in this very promising series. Not that I’m encouraging five, but I believe a second is in the works. The good news for indie authors is – we can update our efforts very easily.

In summary, a really good adventure in a woodland fantasy world. I think it’s much better than the repetitive ‘I’m the son of a god’ series that are so popular.  Give Mr Vanderhorst’s Casey Grimes a go, you’ll enjoy him – and his sister Gloria and their new friends!