Stephen Hawking was a phenomenon. A Brief History of Time sold 10 million copies worldwide.  The author said yes, but hardly anyone read it.  It took me thirty years to read my copy, so he may well be right!  Leonard Mlodinow worked with Stephen on several projects, both science and popular science books, and knew him well.  This is a memoir he was encouraged to write, and it paints a more complex picture of the man we may think we know enough about. Thanks go to Netgalley and the publishers for the opportunity of a review copy. The book was published ten days ago.

Stephen Hawking: a Memoir of Friendship and Physics 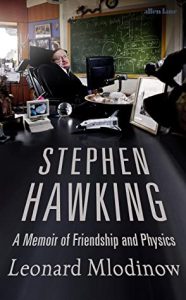 An intimate and inspirational exploration of Stephen Hawking–the man, the friend, and the physicist.

Stephen Hawking was one of the most famous and influential physicists in the world. He left a mark in our culture that touched the lives of millions. His books have inspired countless scientists-to-be, and his research on the laws of black holes and the origin of the universe charted new territory.

Recalling his nearly two-decades as a friend and collaborator with Stephen Hawking, Leonard Mlodinow brings a complex man into focus like no one has before. He introduces us to Hawking the colleague, for whom no detail is too minor to get right, a challenge for a man who could only type one word per minute. We meet Hawking the friend, who creates such strong connections with those around him that he can communicate powerfully with just the raise of an eyebrow. We witness Hawking the genius, who, against all odds, flourishes after he is diagnosed with ALS and pours his mind into uncovering the mysteries of the universe. Brilliant, impish, and kind, Hawking endeared himself to almost everyone he came into contact with. This beautiful portrait is inspirational and is sure to stick with you long after you’ve read it. [goodreads]

So, I’ve read Brief History, and I’ve seen the film starring the ubiquitous Eddie Redmayne. That pretty much confirmed my view of the great physicist. But what happened next?  How did he manage through all those unexpected years of life, and what else did he do?

I confess I missed his other books: even Briefer History,  brought out in a ‘simplified’ version. During this book by Leonard Mlodinow, I laughed many times, but particularly at the following assertion. They had to make considerable changes to Stephen’s original prose in the first book, because he started off preaching to a reader who knew nothing, but quickly turned it into a post-graduate lecture. I hate to say it, but that was one of my criticisms of the finished book!

This memoir does not suffer from those short-comings. Dr Mlodinow still teaches physics at one of the most prestigious physics universities in the world, but he also communicates complex theories in a way the lay person can understand, more or less.  And we lay people do not necessarily wish to enter the theoretical debate, just get an idea of what the debate is about. I found it most helpful to know that physics is about the why, and engineering about the answers and application, since that’s what I’ve thought for years!

The narrative does dodge about a bit. I suppose when you’re writing about space-time it’s sensible not to take things in a linear process.  I’m not sure if this always helped the story, but we got the basics of Hawking’s life and struggles fitted in between other diversions, including the about-turn on radiation from black holes. This discussion was exceptionally interesting, if you enjoy the science side.

What comes across? A picture of a warm, funny, caring man, loved by those who knew him, but incredibly difficult to live with. He inspired dedication. I don’t think people felt sorry for him, even if they might have started out that way. Reading of Stephen’s love of adventure and even recklessness, you can understand they cared. It must have driven his loved ones crazy.

4 thoughts on “Book Review | Stephen Hawking: A Memoir of Friendship and Physics”