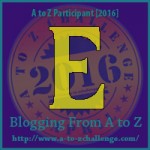 My world-building A to Z brings me to E for Earth, and also to my #IWSG post for April.

Earth is just there, isn’t it?  Surely it doesn’t belong in a world-building theme.  Well, even contemporary writers have to build the world they set their stories in – making them more or less true to life, or what we know as reality.  John Le Carré had to build the world of the Cold War just as effectively as we have to build planets in other star systems.  Maybe he had more data on which to base it.

All those alternate universe Earths are ‘built’ just as diligently as planets in Star Wars or Star Trek; the latter has Earth as well, of course.  The trick is to imagine paths that our world has taken, some years in the future, after a major or insignificant change, depending on your choice.  I think one of the first scifi books I read, at school, was the one where someone goes back on a time-travel tourist trip, steps off the path, and they arrive back to find their future is different.  Everything is harsh and cruel, and when the unfortunate oaf looks at his boot he finds he stepped on a butterfly.  This story is so famous now, most of you are telling me what it was and who wrote it!

Someone who went back to the origins of the human race with her world-building of Earth was Sue Ann Bowling.

I ‘met’ Sue through the A to Z Challenge, and enjoyed her tales, quotes, gardening and Alaska weather checks.  Once a week she would also post Jarn’s Journal, the record of a R’Il’nian who had crashed on Earth before humans as we know them had developed. The Journal as she set it out followed Jarn’s thoughts as he realised he wasn’t going to be able to repair his ship, decided how he could survive, his observations on the native fauna and flora, and eventually his thoughts on the tribal culture he saw about him…

Sue had already published Homecoming and Tourist Trap, with a little taster of her worlds in Horse Power (which I read first – links are to my reviews).  Sue’s scientific background gave her a superb insight into genetic modification, and the possibilities of inter-alien offspring. This underpins her amazing world of R’Ilnoids and all the other species they moderate (with a light touch) as the galactic society does its thing; high-tech, multiple cultures, mind-melding and space accidents.  I believe putting Jarn’s Journal out in the way she did was a piece of insurance on her part.

Sue is no longer with us.  She announced her illness in September 2014, and died in late November, just after putting out her last update (although her pre-scheduled quotes and Journal posts lasted to the year’s end).  I am sad that she left us too soon.  I am glad I read most of Jarn’s Journal but I found it became depressing… to know that it would not be finished, but also because Jarn himself was frustratingly depressed with the restrictions life placed on him on that alien world called Earth.

I am also glad that Sue’s blog is still there for us to access – homecomingbook.wordpress.com.

And that is the technical tip of my #IWSG post – Sue’s free WordPress account continues as a monument to her work, nearly eighteen months after she left us.  I realise that having transferred to an independently hosted blog, that when I go, my blog and websites will go as soon as my hosting platform’s bill is unpaid.  So if you writers have aspirations of being remembered like all those other dead writers who have gone before us, you’d better train your family up to keep your blogs going – or transfer them to a free hosting site!

Not heard of the Insecure Writers Support Group?  Post every first Wednesday of the month, and join up here.