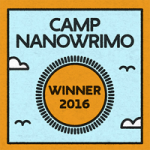 Wow!  It’s over for another year – but then again, it’s not really over, since there are all those new friends I made when visiting – and all those I missed out. Although I feel I did better than some years, I only got to the first 200 on the sign-up list, plus about four visits each to those I’d saved from the Theme Reveal. I wonder whether I was better organised this year, since I also had to fit in Camp NaNoWriMo (and finished the second book in my Viridian System series).

When I thought of doing a world-building theme, I really intended to help myself enrich my own world of the Viridian System series books (I’ve been writing book 2 at Camp Nano during the April mornings, and A to Zing the rest of the day!).  Then I thought you might not find that so interesting, and did 11 Viridian world posts and fifteen others.  That included six author interviews (seven including me!), and I’d like to thank the authors involved for answering my questions so lucidly.  The final question I asked them was ‘what advice would you give to budding world-builders?”  The answers were so brilliant, so insightful, that I thought I’d repeat them here.  I think it says everything I could say about what I’ve learnt during this year’s challenge.  My only regret is that I wasn’t able to contact those other authors I wanted to.  Then again, it did make the posts rather long for an AtoZ. (Click the author’s name to link back to their full interview)

and finally my own contribution, since I interviewed myself for V. It best reflects what I’ve learnt this month.

I’d like to thank the authors of all the books I’ve mentioned this month, living and dead, and also everyone online who has unwittingly supplied an illustration or a cover.  I hope I’ve credited most of the non-covers – the covers are nearly all from Goodreads.

And the winners are!

The winner of the special 1000th post draw was Rebecca Douglass.

The winner of the A2Z giveaway was J Lenni Dorner.