Did I tell you about the morning in August when I woke up and thought I could hear it raining?

Yeah, I know, I’m in the UK, so what’s odd about that?  Well, we hadn’t had rain for weeks and none was forecast.  Norfolk is a very dry county.  Unless it’s coming in off the North Sea (like this week), it won’t be raining when it reaches us, probably.

No, I woke up and thought I could hear water in the bathroom, so I got out, walked to the bathroom and stepped on a wet bathmat.  Half the floor was wet.  It seemed to be coming from the toilet cistern.  I flushed it, fixed the ballcock up so it didn’t refill, and the dripping seemed to stop.  Then I went back to bed.

I could still hear dripping.

With trepidation, I went downstairs.  It was definitely raining in the kitchen, directly below my bathroom.  Oh.

So I fixed up buckets and bowls and towels to sit under the places it seemed to be leaking, and went back to bed to think about it some more.

After sorting the guinea pigs out as usual I looked out my house insurance and made the call.  Someone came round within two hours to check it over, isolate the cistern properly, discover the cistern had cracked all the way round, and discuss next steps.  A couple of weeks later someone else came round to do the insurance survey.  A week or so later someone came round and did the builders survey.  So by the end of August, all the surveys had been done, and I hoped they wouldn’t want to fix it all when I had my cataract operation.  They didn’t.  It was a case of a to-ing and fro-ing between the builder and the insurance people to decide exactly what should be done.  I reckon the builder won as they’ve included the replacement cistern, which I didn’t think would be accepted under ‘accidental damage’ but as ‘wear and tear’ which I’d have to pay for.

Anyway, they started last week.  I waited in all Thursday for them, then checked my phone messages and there was one apologising and saying they’d be starting Friday not Thursday.  My fault for not checking my messages on Wednesday evening.  Never mind, I cancelled golf for Friday.  Friday they got going, with a few hiccups like they weren’t sure exactly what the job was when they first arrived, the electrician wouldn’t be coming because he’d called in sick, so they couldn’t get the lights checked before they put the new ceiling up, and having taken the ceiling down, they decided the walls had water damage too.  They disappeared around lunchtime, after the supervisor had been in, and I wondered about going out.  Then the plumber arrived to check the status of the cistern.  We found out what make and style it was, so that was a plus.

So here we are on Monday, and as this post goes live before they arrive, I hope by now the next wave of specialists has been, fixed the lights, and the plasterer is about to arrive and skim the ceiling.  And later in the week the decorators will arrive to paint the whole of the kitchen and its extension, since it’s one wall of one colour.  That’s decent of them. 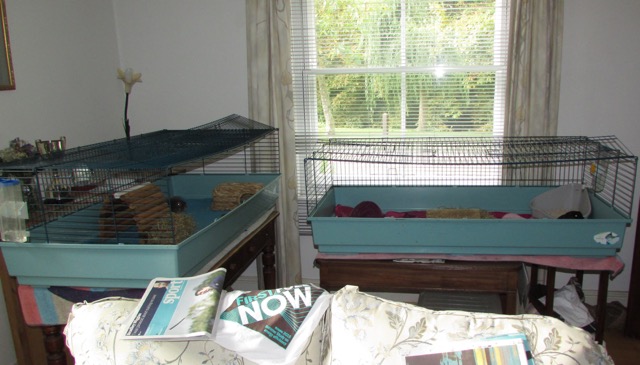 But because of all this, I moved two of the guinea pigs (Oscar and Percy) and their cages and tables and feed and what-not out into the living room the Saturday a week ago, so the painting and building work wouldn’t upset them.  It’s pretty crowded in there.  I think because they could see the comings and goings through the window and door, they took all the noise in the kitchen in their stride.  Unlike Kevin and Midge upstairs who were outraged by the disturbance.  Maybe it was because they couldn’t see where these strange noises were coming from.

Anyway, with luck, by this time next week all will be back to normal, everyone will be in the places they are accustomed and I will have a nice clean kitchen with most things in it working.  And maybe even a new cistern in the bathroom.

I couldn’t think of anything else to write today.  I wonder why.

Oh, yes, I can.  The winner of the Stuck in a Good Book Giveaway is Krystal L, who has chosen Dear Amy by Helen Callaghan as her prize.

Things are sent to try us

16 thoughts on “Things are sent to try us”