Pair Alleles is book 4 in the wonderfully mind-bending Derivatives of Displacement series by Jennifer Ellis.  We follow twins Abbey and Caleb, who are both ‘gifted’ – Abbey starts the series at around age 12 studying with the 16-18 year old maths students – and the rest of their family, plus friend Mark, who has Asperger’s and is more and more the rock that I cling to as this series progresses.  Having said that, I think Ms Ellis must be reading my reviews*, since this book starts with a wonderful summary of the series so far.  I don’t recommend you skip the first three books and rely on this summary, but it was a great help to my memory, even though I only read book 3 in September. 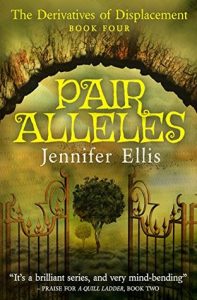 What could go wrong when you use a wormhole to travel to a different universe? Abbey has many hypotheses, but nobody wants to use the scientific method to find out.

So Abbey, Caleb, Simon, and Mark plunge blindly through the wormhole in search of their parents, accompanied by the ever-enigmatic Sylvain. They encounter powerful witches and fierce switchers on the verge of war, are forced to “physic” their way out of multiple situations, and discover that Ian is not who he seems.

Mark, who finds himself revered as special in this strange new land, must find the warrior within himself, while Abbey struggles to open her mind to her parents and her brothers.

But Sandy is on their trail, as is a general in the US military who’s in search of an element needed to fuel space travel and save Earth. When Sandy grows a new grave tree and the wormhole gets stuck open, the world they have entered tips over into armed conflict—and only Abbey, Caleb, Simon, and Mark can stop it.

“What could go wrong when you use a wormhole?”  Well, I’ve made plenty go wrong when my characters use a wormhole, but Abbey, Caleb, Mark and their friends are more used to jumping through time on the ‘docks’ than space, which is what happens here.  They are still in deep trouble.

Despite being in an entirely new place with some wondrously inventive world-building going on, I felt much more at home in this book than the previous one.  I think this may be partly because we are in one time and space place, not multiple and crossing dimensions as in the other books.  Also, we tend to stick with Mark’s adventure, then Abbey’s, rather than more complex arrangements of who knows whom, and who’s with whom, in which alternative reality.  Also, all the characters whose names begin with S started to make sense to me (although I still get some of them mixed up).  The two factions within the new world are nicely delineated and I loved it when the Sixth showed their abilities.  The atmosphere under the mountain (an Abbey and Caleb journey) was intense, suffocating and ghostly all at the same time.

There is a protracted battle towards the end, which started to make me wonder whether this can still be classed as MG, but like a lot of us who start series within MG, they seem to grow up of their own accord.  There is nothing gratuitous, but it is fierce, and people die.  The combination of ‘alternative’ powers and science/technology in use in this book is terrific, and it all comes to a head in this battle.

This episode is pacy, informative, beautifully descriptive, and really brings you into a sense of place (even when in no-place – like Harry in King’s Cross in HP Book 7).  If, like me, you’ve followed the series through, you’ll be feeling more confident about tackling the next in the series.  If you haven’t read the series yet, start with A Pair of Docks.  You won’t regret it.

Another mind-boggling episode, but now I feel at home in this universe. I gave this one 5 stars.

* I know Ms Ellis is reading my reviews: check out the cover and what it says at the bottom, then check out my review of book two!