Dying Fall is number 5 in Elly Griffiths’ Ruth Galloway series, and it’s a cracking read.  I discovered books 6 and 7 waiting on my shelf, purchased at Noirwich (when I met the author). It’s fair to say I’m a big fan!  Several searches revealed I hadn’t got this one, so I bought it for my Kindle.  I bought book 8 at Christmas, and got the hardcover of book 9 at a book-signing at the end of February, its release day. 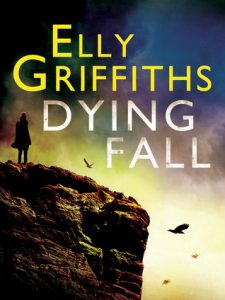 Ruth’s old friend Dan Golding thinks he has made a discovery that will change archaeology forever – but he needs Ruth’s help. Then, Dan is killed in a fire, leaving Ruth with one clue: the tomb of the Raven King.

DCI Nelson is also rediscovering the past. He meets his friend Sandy Macleod, now at Blackpool CID, who tells him there are mysterious circumstances surrounding Dan’s death. A Neo-Nazi group at Dan’s University has been making threats and could be involved.

Many of Dan’s colleagues seem fearful and have secrets to hide. Ruth is drawn into the mystery, and where she goes, so does her daughter, Kate. This time, it’s not just Ruth’s life at risk.

Dying Fall opens with Ruth in the safety of her cottage at the edge of the windswept marshes of North Norfolk. Archaeologist Ruth Galloway is snoozing with her cat on her lap, and two-year-old daughter Kate safely asleep upstairs.  You know immediately a storm is not far off.

In this case, Ruth hears of the death of a college friend (whom she once snogged on a bus) in a house fire. Next, a voicemail arrives from him: would she look at an exciting find he’s made in a Roman settlement in Lancashire?  Shortly after that she starts receiving threatening text messages.  Tell Nelson, I tell her.  Of course she doesn’t, until things have escalated much too far. She also gets an email from a University buddies networking site, inviting her to join her other friends there. It’s phishing, I tell her, ignore it. It’s probably the killer. She takes a look at it, but doesn’t sign up. Then when she responds to the invitation from her friend’s boss to go to Lancashire to give her expert opinion on his ‘finds’, she starts wondering…

Although the laying of traps is pretty obvious, the skillful weaving of the plot, the relationships between all the people, and the uncovering of the layers beneath the surface, are all totally engrossing.  It lifts it from being a tame crime novel into something far more suspenseful.  I imagine some people dislike both the Arthurian legend and the witches of Pendle that are mixed into the plot, but I thoroughly enjoyed them–and the ravens signifying sinister omens.  Plenty of symbolism is bandied about by both believers and manipulators, and throughout it all young Kate wends her childish way, whether it’s building replica sand-henges on Blackpool beach with the friendly druid, or giving all the relatives heart attacks as she calls Nelson ‘dada’ in front of his wife and his mother.

Dying Fall is charming, engrossing, and satisfying, and if I did spot the ringleader very near the start, there were still motivations to explore to the full.  The double-bluff near the end was carried on just past the point where I thought it was a triple bluff after all.  Tension, emotions played like a guitar string, and not quite so much deathly danger for Ruth as usual, for which I was very glad.  Oh, no.  That was reserved for others we know and love!

It’s not a book to jump into the series. Being ‘away from home’ the protagonists continue a few loose ends in Norfolk by text and phone, as well as with characters on the spot.  But Dying Fall is a cracking good read. I’m happy to award a Goodreads 5 stars, because I think it’s amazing.  I accept I’m biased.  I’m looking forward to the next one – avidly.  These just aren’t books you can say you’re dying to read….!