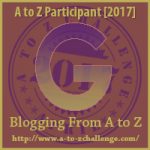 Gangsta Granny was a book I picked up last year, although I’d been planning to read it for ages.  I’d heard good things about it, and really feel I should read more UK authors works, especially for older children.  The author, David Walliams, is a well-known comedian from tv, although I have not watched a show he’s been in, so I had no ‘authors voice’ to confuse me.  I read this as part of the Goodreads Great Middle Grade Reads group’s themed book for March, and it’s my post for G in the A to Z Challenge. 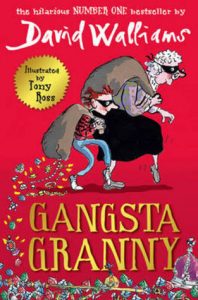 Another hilarious and moving novel from David Walliams, number one bestseller and fastest growing children’s author in the country. A story of prejudice and acceptance, funny lists and silly words, this new book has all the hallmarks of David’s previous bestsellers.

Our hero Ben is bored beyond belief after he is made to stay at his grandma’s house. She’s the boringest grandma ever: all she wants to do is to play Scrabble, and eat cabbage soup. But there are two things Ben doesn’t know about his grandma.
1) She was once an international jewel thief.
2) All her life, she has been plotting to steal the Crown Jewels, and now she needs Ben’s help…

Gangsta Granny opens slowly, with eleven-year-old Ben going off for his usual Friday night sleepover at his granny’s house.  The wonderful illustrations by Tony Ross in this book picture the typical boring granny; grey hair, thick glasses, mauve cardigan, burgundy slippers.  I am not a grandmother and I do not wear mauve.  Not often, anyway.  Other than that…

Ben’s parents ship him off each week to allow them to pander to their ballroom dancing passion – mainly obsession with a celebrity tv dance show. If readers realise that Strictly Stars Dancing is a fictional Strictly Come Dancing, the UK version of Dancing with the Stars, they should get the rest. The take-offs are brilliant, and I imagine Craig Revel-Horwood (snarky judge) is delighted to be renamed Craig Maltezer-Woodward. Anne Widdecombe (former MP and Cabinet Minister) is probably flattered by her portrayal as Dame Rachel Prejudice MP.  Was her turn really pre-2011, this book’s published date?  Today’s kids will probably get it, but they won’t recognise the stars for much longer, since these people come and go so quickly.

Even for non-Strictly fans, the laughter works on every level. Maybe the portrayal of the Queen stalking the corridors of the Tower of London at midnight gave her the courage to join in the London 2012 Olympics opening ceremonies accompanying James Bond to sky-dive into the stadium… Yes, ma’am, you were perfectly (and respectfully) portrayed.

With a suitably and agreeably silly plot, vivid descriptions, and cringeworthy characters, it was completely un-put-downable.  But it’s also a fast read because there are great illustrations especially to illustrate lists, and also because the font is large and double spaced.  It does make it easy to read, although the sentence structure is not geared to an easy reader.  I think it will encourage boys to read it regardless.

I’m not a grandmother, but I am an auntie, and after Gangsta Granny I’m really anxious to read Awful Auntie!