I was looking forward to finding a title beginning with X for my flash fiction today, although I was also tempted to borrow Rebecca Douglass’s spaceman Xavier Xanthum.  Then I realised it was the last Friday of the month, so I could bring out a Flashback post, and take you back to April 2013 for X Marks the Spot.  This is the kicking-off point for book 8 of the Princelings of the East series, entitled The Princelings of the North, which is due out in the winter. 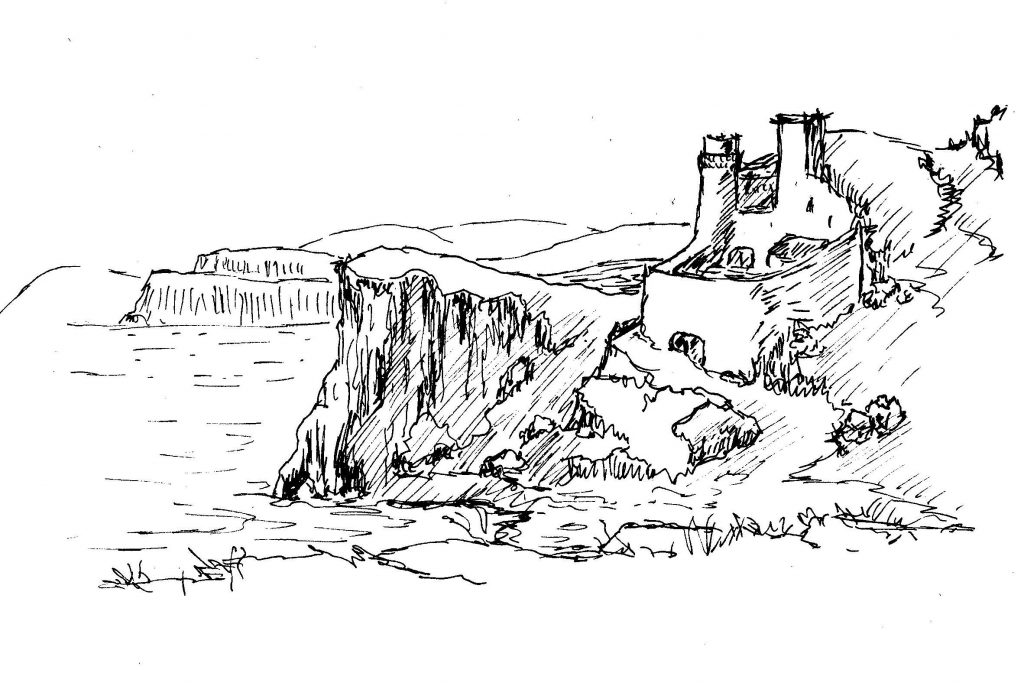 In which Dylan finds a map, and Dougall finds his courage

Dylan scampered up the hillside out of Glen Aros and was nearly blown back down again as he hit the wind coming over the ridge.  He crept along the hillside in the shelter of the rock outcrop, slipped through a little col and ran as fast as he could down the other side.  Only a few more miles, and a few more ridges, and he’d be home, safe and warm inside Castle Haunn.

At the next ridge, the November wind was joined by driving rain, and he decided that maybe the long way round in the shelter of the cliffs, fording the Ensay Burn where it joined the sea, might be the prudent course.

It might be prudent, but it was just as wet, he decided as he paused to let the wave crash on the black rocks between him and the castle.  He waited till it started to withdraw and ran for home, trying to ignore the waters as they swirled and boiled just inches from his feet.  He veered off, drawn by a small green bottle left high up in a rock pool.  He jumped over the slimy rocks, fished it out with a piece of driftwood, and carried on up the rocky shore, dodging in between the sodden mounds of thrift, prickly sea holly and bog.

He skittered to a halt underneath the arched entrance to the castle and banged on the door to demand admittance.  No one came, so he climbed up the door, aided by a couple of cracks in the plasterwork of the wall beside it, and clambered over the top.  It was a considerable drop onto his feet the other side.  Dylan was as agile as a cat and twice as crafty.  He shook the water off his heavy coat and scampered up to the room he shared with his brother Dougall. He bet Dougall had never seen anything as interesting as the contents of this bottle.

Dylan sighed, but pointed out the lines. “There’s the outline of the island, and the rocky inlet where the boats go in, and the wiggly lines are where the creek goes into the marshes. And there’s an X for where the treasure is buried!” he finished, leaping off the bed. “Oh, why can’t we go now? It might rain tomorrow!”

“It got washed into the tide pool down near the Ensay Burn. I fished it out. It was in a bottle.  I saw it glinting green and bobbing about.  I thought it had a stick inside it, but it broke when I dropped it on the way back and I found the paper!”

Dougall had not yet caught his brother’s enthusiasm, much to Dylan’s irritation.

“But why do you think it’s a treasure map?”

Dougall thought for a bit.  He wasn’t familiar with maps, except of the night sky, since he was one of the star-watching team at the castle.  He didn’t go out of the castle much, except onto the crags above to check the solar cells or the turbine flow. It was Dylan who went all over the island, running messages. He’d been most places.

“Umm, not exactly.  It’s pretty much on the way to Tober Hold, but I usually go a bit further up the glen, and keep to the high ground.  This bit’s all wet,” he added, pointing to the network of lines he’d described as the creek.

Dylan thought for a bit.  Then he looked at the map again and looked at his feet. “There’s a ruin on a rock.  By the crossroads,” he mumbled.

Dougall looked closer at the map. “Well, nobody’s marked roads going into and out of the cross,” he said. “You might still be right.  Is it the right place for the crossroads?”

It was Dylan’s turn to study the map closely. “Yes,” he concluded. He stared at it before a thought came to him. “Why would anyone…”

“… mark a cross on a map and not the roads leading up to it?” finished Dougall, looking at him.  “How long will it take us to get there?”