The Camelot Kids is Ben Zackheim’s second series, or at least I think so. He started publishing it after the Shirley Link series, and I’ve already reviewed a few of those.

I read Part 1 of the Camelot Kids without realising he’d brought it out as a sort of serial.  Parts 1 to 4 became known as either Camelot Kids Book 1 or Volume 1, depending on which version of Amazon or other online retailer you use.  Confused yet?  Good!  Ben is a fellow BookElf and has further Shirley Link short stories in our BookElves Anthologies.

It was our Book of the Month for April at the Goodreads Great Middle Grade Reads group, which I heartily recommend if you enjoy books for older children, or want to find views on suitable reading for your kids. 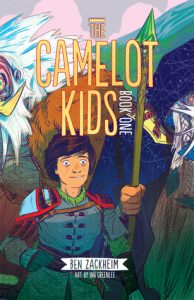 The Camelot Kids is a series that tells the story of Simon Sharp, a 14-year-old orphan. Simon isn’t a normal teenager. He’s a kid on a mission. He’s determined to find a place to belong.

If you ask him how his parents died, he’ll tell you King Arthur killed them. They died looking for proof that Camelot is real.

An estranged uncle flies Simon to Scotland for room and board. The fourteen year old soon discovers someone wants him dead. But who cares about some outcast teenager from America?

When a grumpy, 3276 year old Merlin shows up to protect him, Simon finds that the answer is an epic adventure away.

Packed with surprises, The Camelot Kids is a fresh take on the beloved myth. (Goodreads Blurb)

I skipped through the first few chapters as far as I remembered. Once it got into New Camelot I enjoyed it a lot more – maybe the start is too typical of other books of the same ilk. In skipping through I puzzled over the friends from school until I realised I was mixing it up with The Vanished Knight.   However, while it has a similar weird school start, the development is entirely different.

I felt the main character, Simon, was very well handled. He develops (or reverts) from an angry street-wise orphan, to a well-educated son of missing archaeologist parents on a mission. Gwen’s development was less clear and Chester a little stereotypical; our introduction to them at school was brief, and as mentioned, I mixed them up with another beauty and bully. The characters around them were excellent. There was a huge range of non-human characters who were well developed. I didn’t know they came into Arthurian legend, but as I’ve said before, it’s not my forte. Action scenes were particularly well-handled – and sensitively enough for the age group.

It’s a great mixture of fantasy, legend and coming-of-age mystery.  The plot has some well-hidden twists as well as double-backs, and some of these come just as you thought it was becoming predictable – wonderful timing!

The author’s other series, Shirley Link, is more to my preference, but the two are very different and show the author’s versatility in handling two diverse worlds for young people to enjoy.  Highly recommended.